A Slow Target is an Easy Target: Practice The T-Drill 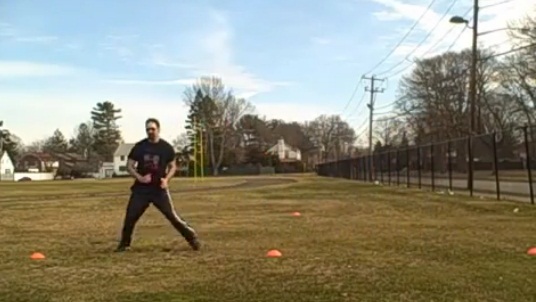 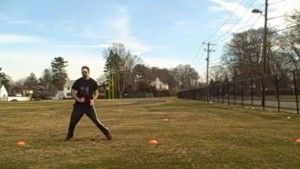 One of the most basic truths about sports success is that it’s better to be fast than to be slow, but things aren’t actually that simple. “Fast” is good, sure, but there are actually different kinds of “fast.” More specifically, there are different aspects of speed that need attention if we’re really interested in becoming lightning-fast bringers of pain and destruction.

As athletes, we need to understand that there’s speed and then there’s agility, and if you want to dominate on the field, you better make sure you’ve been training to improve both. One without the other is like being chrono’d all the way down to 100 f.p.s. If that’s what you’re stuck playing with… good luck, pal, I’d hate to be you.

For another example of the difference between speed and agility, let’s jump into the ocean. The blue whale, which is the largest animal on planet Earth around 90 feet long and around 240,000 pounds, can swim up to 30 miles per hour. That’s pretty speedy, but at this ginormous size, it’s definitely not an agile creature. Hairpin turns and water acrobatics are not its thing.

Contrast that with your friendly neighborhood dolphin. Some dolphins can be around 9 feet long and nearly 800 pounds, while swimming up to 25 miles per hour. Again, that’s pretty quick – a high rate of speed – but these goofy guys are world-renowned for being agile tricksters who can jump through hoops, “balance” on their tails on the water’s surface, and do barrel rolls while jumping in mid-air – a high level of agility.

Agility is about changing directions while maintaining speed. Some people can get away with being fast and not agile, but it’s much better to be both. Let’s look at one drill that can help us to build agility in all directions.

If agility is, essentially, the ability to change direction without losing speed, we want to train in a way that has us moving in all different directions. Make sense, right?

The T-Drill is the most fundamental, and one of the most effective, agility drills around because it trains the three basic directions of movement – Straight-ahead (forwards), backpedaling (reverse or backwards), and lateral (sideways).

By actually running in a “T”-shaped pattern, we train the body’s ability to accelerate, quickly decelerate, and quickly re-accelerate in a different direction. This is very similar to the footwork needed to approach a bunker at top speed, slow down enough to pop off a few shots, and immediately advance to another bunker upfield.

To perform the T-Drill, you’re going to need four cones (or random place markers, big textbooks, bags of dirty laundry, whatever). The first will be placed at the “base.” The second will be placed approximately 25 feet straight ahead of the base. We’ll call this one the “center.” Approximately 15 feet to the direct left and right of “center” will be the third and fourth cones.

If there’s one “trick” to it, it’s to remain facing forward the entire time. That will ensure a proper lateral shuffle while avoiding any chance to cheat by turning and facing the left/ right cone, which would reduce the overall effectiveness.

When running forwards and backwards, make sure to coordinate your arm swings for maximum technique. When shuffling sideways, be sure to keep the hips back and low, and keep your feet close to the ground, only coming up enough to move without dragging on the grass. We want to be shuffle/sliding, not actually jumping like a sideways kangaroo.

Make sure you’re properly warmed-up before running the drill, as you should be before any kind of training. To incorporate this as part of your speed and agility workout, one or two days a week run through the drill up to five times, resting two or three minutes between attempts to make sure you’re fully recovered between each set.

An ideal T-Drill run time will be under 10 seconds per drill. Maintaining that time for all five sets would be a very solid goal to shoot for, and improving upon that time on a regular basis (monthly or even every other month) would show me an athlete who’s actively trying to perform better and become a more effective player.

Because this drill covers all three basic movement patterns, you could actually use it as part of a basic warm-up instead of (or in addition to) using it as a primary training method. Rather than sprinting through the drill at full speed, go through it around half- speed, focusing on loosening up the hips and ankles.

During this type of warm-up, you could also incorporate a bit of a “high knee” run on the forwards and backwards part (first from base to center, and then from center backwards to base) purposely exaggerating your knee lift as you move, to emphasize hip flexor activation and glute/hamstring mobility.

While a good T-Drill time is definitely not an indicator of a good athlete, a good athlete would (or should) be able to get through the T-Drill without a problem.

The agility that is necessary to run from Point A to Point B, and then cut to Point C, cut across to Point D, return to Point B, and end up at Point A is the same kind of agility that will bring us off the break to our first target bunker, redirect us to the snake, and bring us up to an even better field position.

If you aren’t already including some type of speed and agility training into your program, the T-Drill is absolutely a great place to start. Get after it, build some quick feet, and after a few weeks of practice, you should be feeling light and agile… like a dangerous land dolphin (um, or something like that).