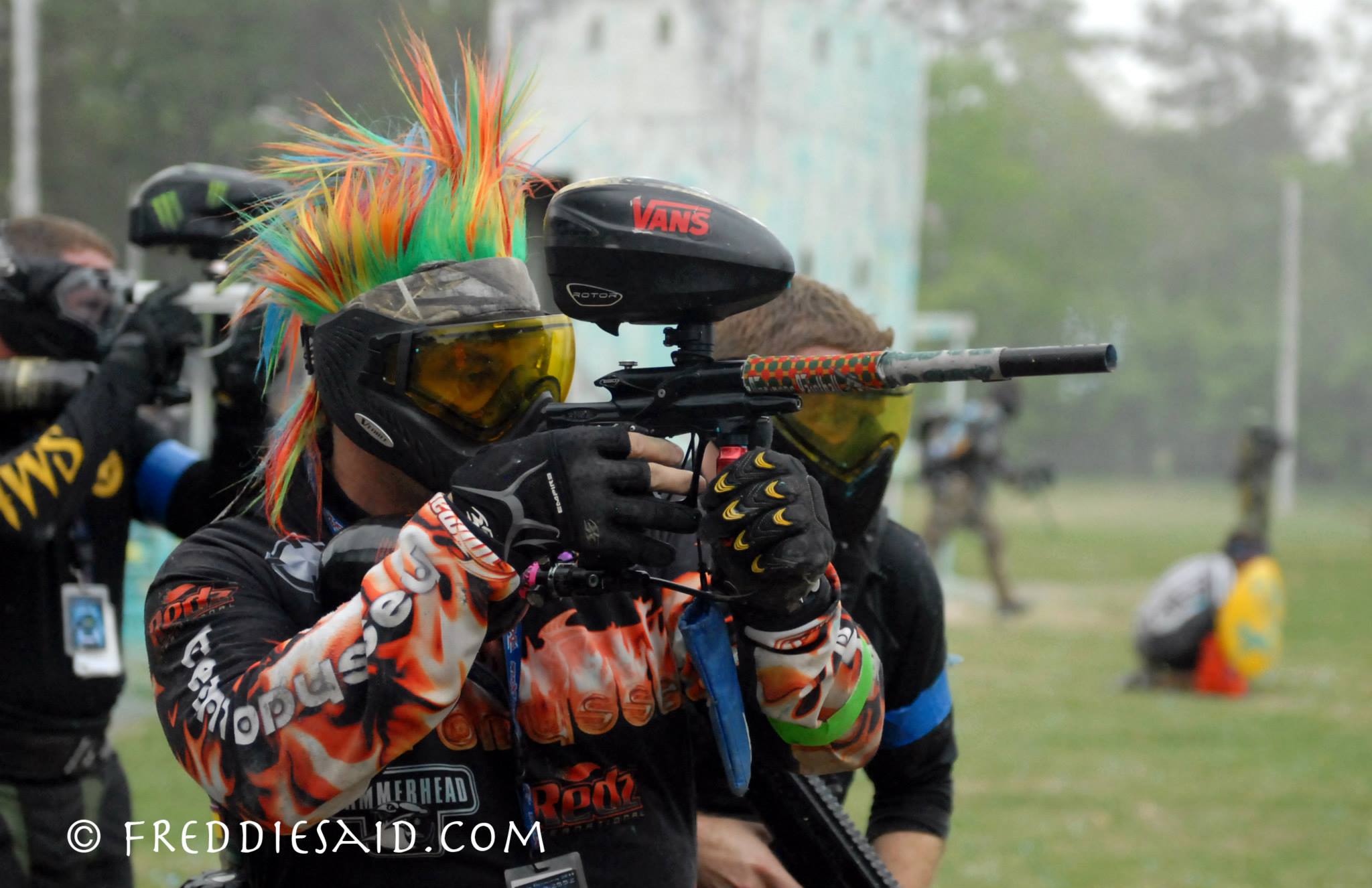 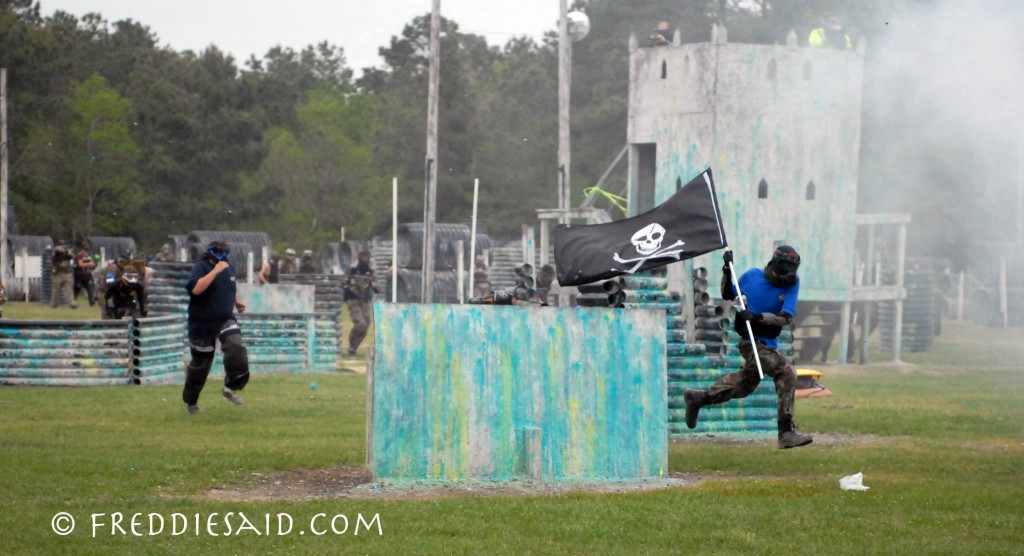 Every year, on the second weekend of April, the largest scenario in Texas goes down at TXR Paintball in Houston—Viper’s Annual Texas Revolution, or T-Rev, for the initiated. This year, starting early Friday morning, colorful players of all ages poured through the gates, honking and waving like a family reunion. Teams spread out to their traditional camping spots under the pines, barbecue pits fired up, and the party began.

Every year brings a different storyline, and nearly 600 players participated in this year’s video game-themed event, called HALO: 2552. The Blue team, or UNSC forces, were under the command of Will “Hot Sauce” Cheatwood of Twisted Militia; while the Red team, or Covenant Empire, was commanded by Joey “Tekk” Begneaud of Type 3, both of whom were veteran players but first time generals. However, with Wes “Raptor” Garza of SAS Houston XO’ing for Hot Sauce and Bryan “Radio” Angelo of Alter Ego backing Tekk, each had a fighting chance. 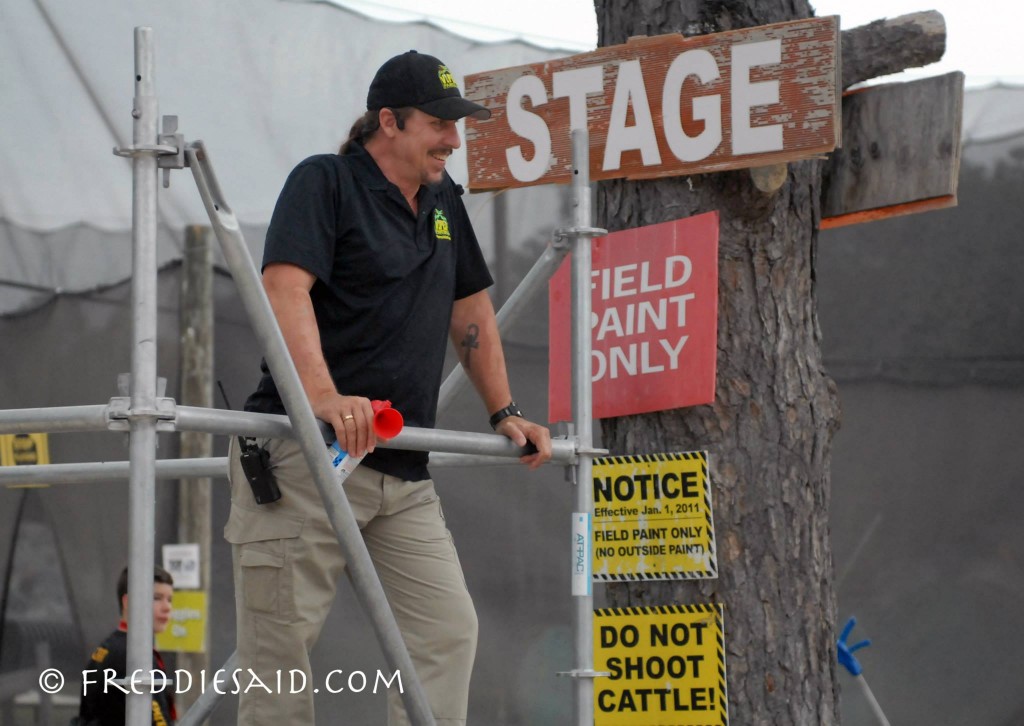 T-Rev is no small-time production. It’s more like an amusement park for paintballers, with mini-games, third factions, and off-field entertainment galore. The first paintballs were fired Friday afternoon in a magfed-only mini-game produced by Viper and Carlos Pagan of the Ghosts of Sparta. RAP4 was on-site with a fully stocked booth and an arsenal of magfed, 468 markers to loan out. Off the field, RoadWarrior Games came with a state-of-the-art video game trailer where young and old alike gathered to size each other up in Call of Duty and other games late into the night.

The actual scenario is never a simple, straight-forward paintball game either. Besides the UNSC and Covenant forces, the third faction in the scenario was the Flood, consisting of heavy hitters from local scenario teams including Odyssey, Honey Badgers, and the Aztec Warriors. Their job was to deal out wholesale pain to whichever side had more “dead” players; that is, more players lounging around staging. The game trailer also served a purpose in the scenario. Players from each side sparred in 4-on-4 team deathmatches on HALO Reach to win supplies, such as C4 and medic cards, for their commanders. Each side also had 14 special characters with powerful abilities. 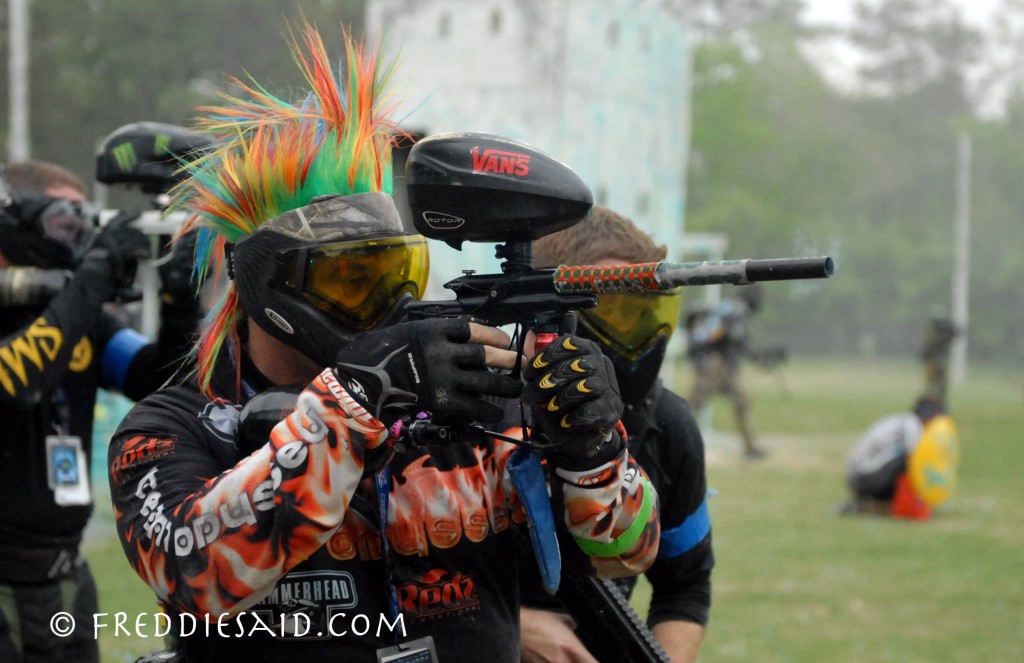 Leading up to the game, recruiting was tough for the UNSC. The Covenant seemed to have a who’s-who of established, mission-running teams, like Black List, Alter Ego, and COBRA, while the UNSC had a solid core of veteran teams, such as the Texas Rangers and Outlaw Crew, supplemented with up-and-coming contenders like Bad Company. Odds were already favoring Tekk and the Covenant and the news only got worse as word got around that the Covenant would have as many as 6 tanks, while the UNSC was hoping to maybe have 1. On Friday, the camp ground was buzzing with speculation that Viper would switch teams around and “balance the sides”, but as day turned to night it became clear there would be no switching. As one the Covenant captain mused, “I guess Viper is not as impressed with us as we are with ourselves.” At closed-door captain’s meetings later that night, Covenant commanders were scratching their heads over the suspected imbalance, and began focusing on each side’s special roles, trying to rank the advantages and deduce why Viper felt the sides were even.

The UNSC had several Spartans (players who had to be shot three separate times to be eliminated) and Hell Jumpers, who could insert virtually anywhere on the field, while the Covenant had Elites (same abilities as Spartans), Jackals, and Hunters, who were armored but could only carry pistols or LAWs, respectively. Alien strategists concluded that the Human’s Hell Jumpers added weight to the UNSC side of the scale, but whether the human commanders would use them to best effect was yet to be seen. 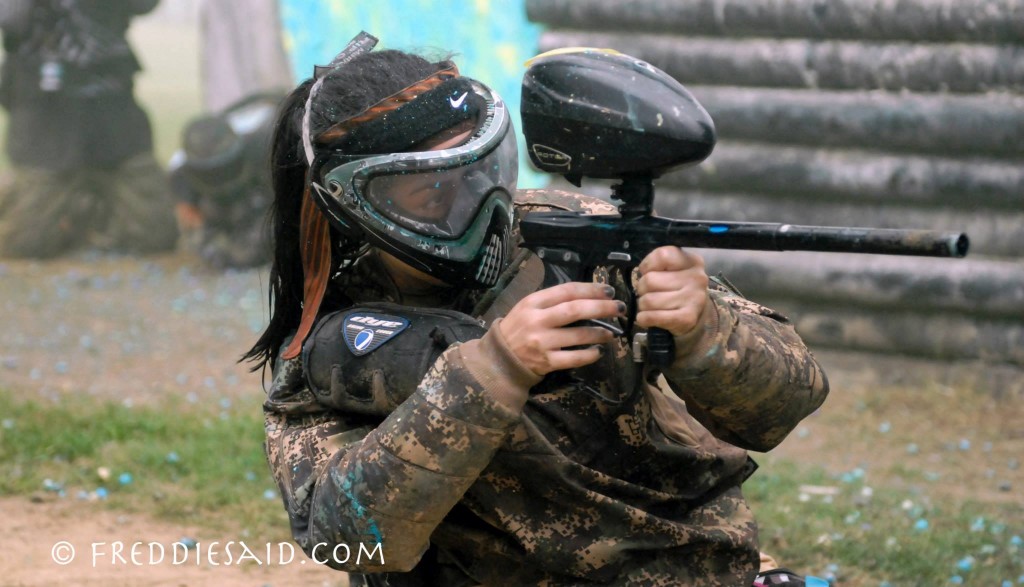 The field at TXR can be divided roughly into thirds, with the northern two-thirds being thick forest and the southern two-thirds consisting of wood and pipe structures peppered across a large, open field casually known as “Speedball”. At the bird banger, the Covenant (red team) took Speedball in a mad rush, blocking the blue teams advance. But their success in the south was short-lived. The UNSC had many young, aggressive players who managed to retake and hold Speedball and its 9 objectives for the rest of the day. Using tanks, to which the UNSC had an answer to in the form of SAS-Houston’s Joshua “AntiCon” Klein’s rapid, accurate rocket fire, the Covenant enjoyed some short-term success in regaining the open ground. Nevertheless, sheer determination prevailed, and no sooner did the alien tanks push the lines than human infantry filled right back in around the motorized meat grinders. At one point, the Texas Light Infantry tank looked like a shark swimming in a school of fish: Blue players gave it a wide, 360-degree berth, but rushed back in around it once passed. During the Saturday day portion, the UNSC pulled slightly ahead, with 475 points to the Covenant’s 460. 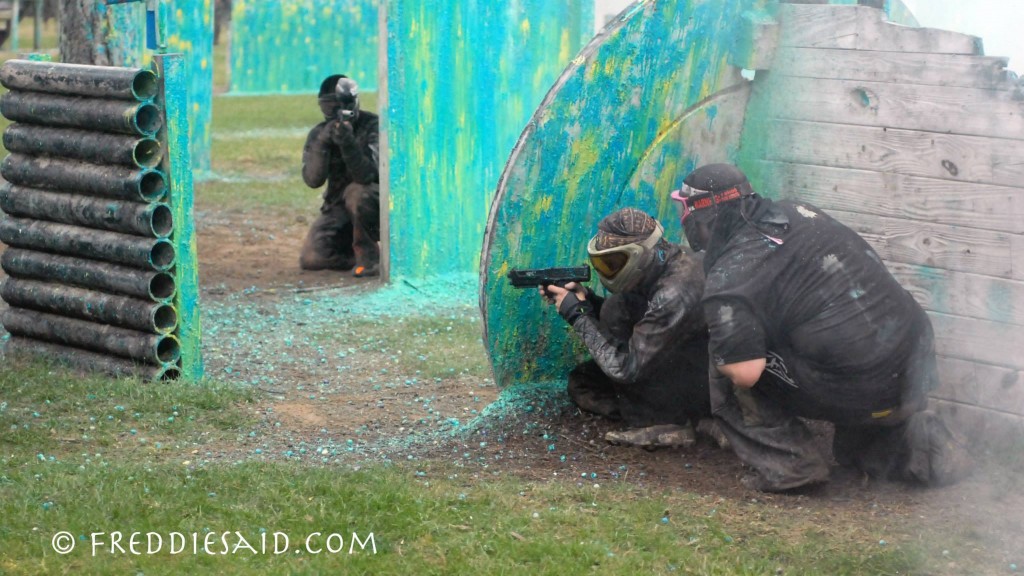 Saturday night came, and out came the night vision goggles and thermal sights. Many night players chose to run with pistols, barrels, or no marker at all, so the battlefield was deceptively quiet. Everywhere, players lurked in the shadows like panthers. Perhaps the top story of the game came out of the night portion, when a squad from COBRA tricked the UNSC base defense into allowing them to run base security, leading to three “all deads” before the intruders accepted a mission card from the unsuspecting commander Hot Sauce and delivered it back to the Alien commander. For these shenanigans, COBRA earned the Most Formidable Opponent award and COBRA’s commander, Seba “Superman” Alvarez, won Most Valuable Player. Despite the Covenant’s deep-cover antics, however, by the end of the night portion, Blue had pulled even farther ahead with a total score of 1,030 to Red’s 905. 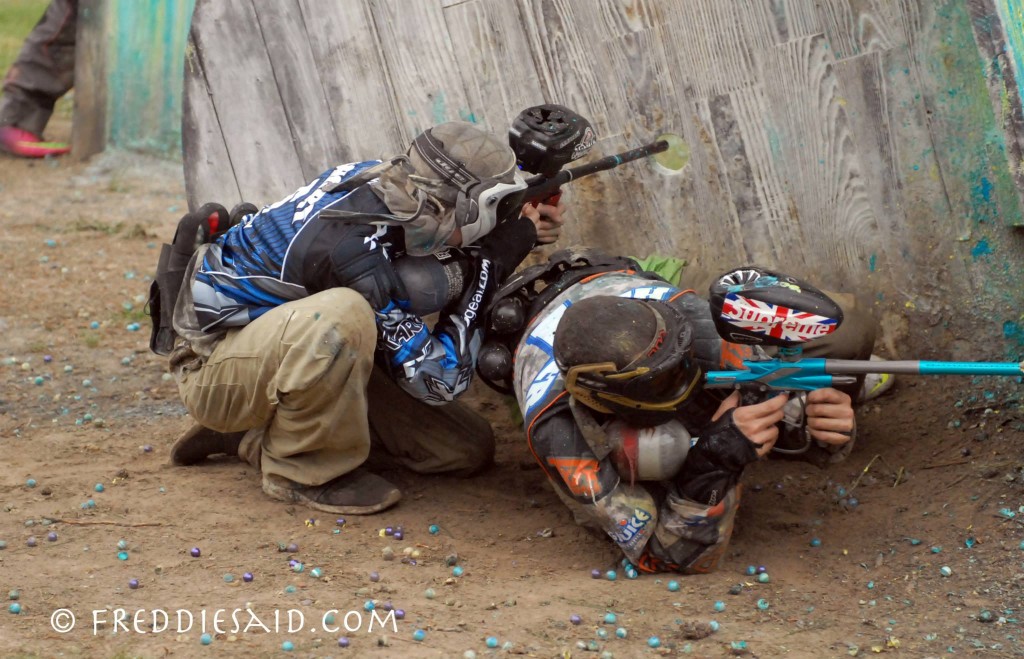 Sunday, bases were swapped, and the Aliens turned up the heat. The tanks rumbled out allowing the red team to complete more missions on speedball, eventually closing the gap in just a few hours to UNSC: 1,490 versus Covenant: 1,455. The main portion of the game concluded at 30-minutes past noon, and Viper gathered the players for Final Battle orientation. In an unusual twist, Viper announced that the spread was a mere 35 points. Backs stiffened, and the crowd buzzed. With 100 points on the line at Final Battle, the game was still up for grabs. To make it even more interesting, Red and Blue discovered that the third faction, the Flood, who had been a thorn in everyone’s side all weekend, would be dug-in at the 50-yard-line.

Straight off the bird banger, agility, aggression, and determination paid off for the UNSC, as they drove shooters all the way to the “Dog Bone”—the pipe structure at the 50 yard line—and captured all five Slap Sticks. Red’s initial push fell well short of the 40-yard line, as players dropped under a barrage of Flood paint. By the time the Flood was dislodged from the center, Blue was entrenched at every Slap Stick from left to right, and Red found themselves stiff-armed and out of the fight. When all was said and done, the UNSC, having won day and night Saturday and dominating the Final Battle, pulled off a close victory with 1,490 points to the Covenant’s 1,455. 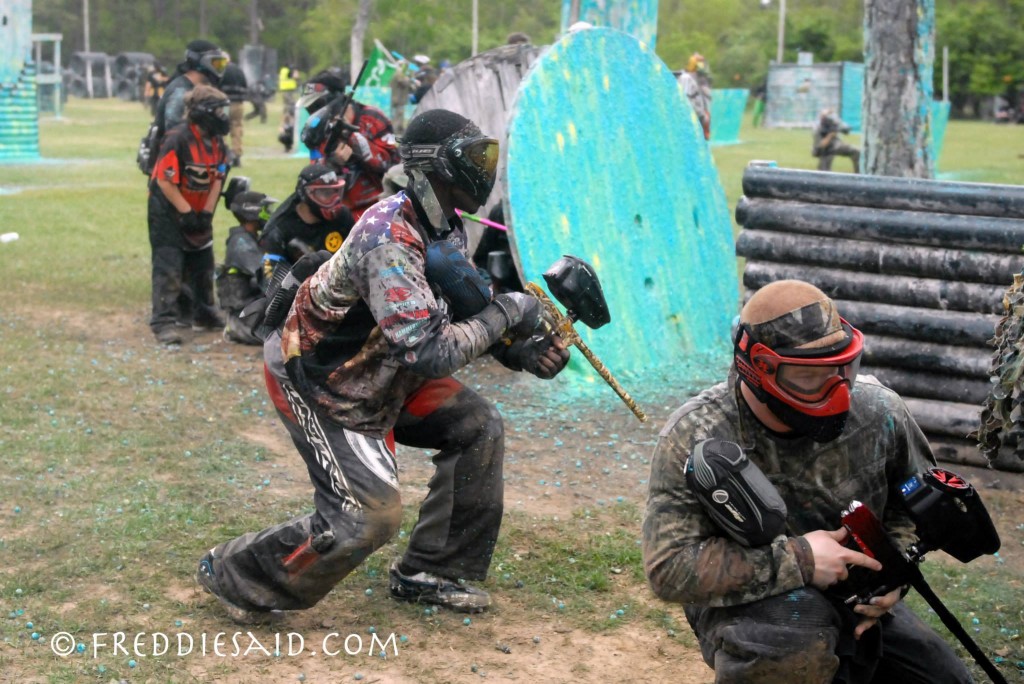 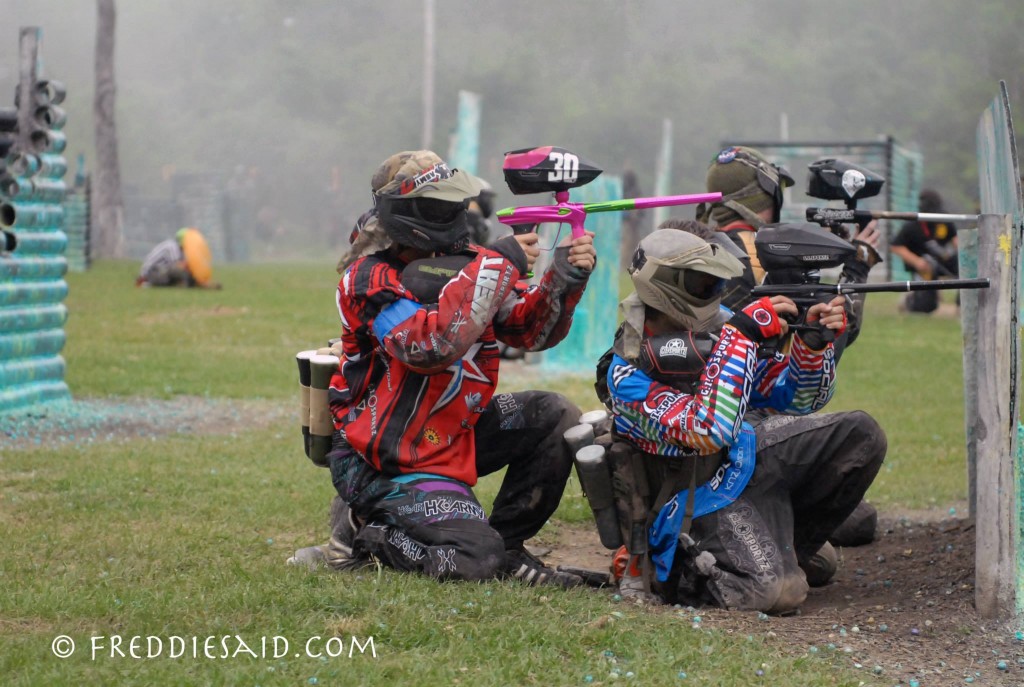