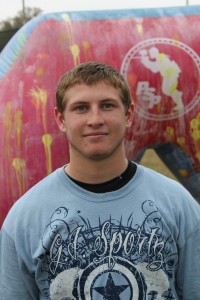 Social Paintball has confirmed that Jacob Edwards (#31, Front; 21 PBA rank) has suffered a high ankle sprain that occured during the first match of Sunday play at the CXBL event he attended last weekend. He stated that the injury happened while he was attempting a runthrough on the dorito side when his loader jammed. He attempted to jump back into a bunker and in doing the move he heard his ankle crack. After making his gun work again he attempted to move out of the bunker, thinking the noise was just a joint-crack, but found that he could not put any weight on the ankle and fell to the ground.

Jacob confirmed with Social Paintball that the sprain is a high ankle sprain and he is currently on medication to ease the pain. Also, he said that he will sit out the upcoming NPPL Vegas event in hopes that he will be back to 100% before the PSP World Cup.

Analysis: While this is not a dagger to the back of Tampa Bay Damage, the loss of the #21 ranked player in the PSP is not something the club would like to be dealing with and it may test their depth. Jacob has given a time table of being back to playing in 2-3 weeks, however it is unlikely that he will be completely 100% in that amount of time as high ankle sprains can linger a month or more, depending on the severity of the injury. We will continue to monitor the situation and keep you informed as best as possible.