Consider this an open letter, a public announcement, whatever you wish, to Paintball Access: I’m frustrated with your stats. To all of you with your jaws on the floor and the other few of you who are going into a catatonic rage, relax; it’s for a good reason, just hear me out. Yes, it’s really awesome that paintball has evolved to the point that people are keeping track of who eliminated who – that should be a fundamental “talking point” amongst paintball fans and a conversation we should be having in the sport is “does the highest elimination count equal the best player”, just as basketball discusses the role of the point-guard. It’s important. Vital even. Yes, it’s awesome that we can now begin to dissect rosters to see exactly how individual players shape up against their peers, and compare them to others of similar performance; again, a vital development in tournament paintball commentary and fandom. Honestly, it’s about time that we kept track of penalties (what stat could be easier? And why wasn’t this started in the NXL days?).

But I’m still not satisfied. The product Paintball Access is producing, in my opinion, is high quality, but incredibly incomplete. This incompleteness, primarily, is due to the lack of stats that explain the game, or the “Box Score” as it is commonly known. Wikipedia states the box score is “a structured summary of the results from a spots competition. The box score lists the game score as well as individual and team achievements in the game.” Seems like a no-brainer right? Paintball Access thought so too and took it upon themselves to publish said scores for an event or two last year, but these have since disappeared and fallen off the face of the earth. 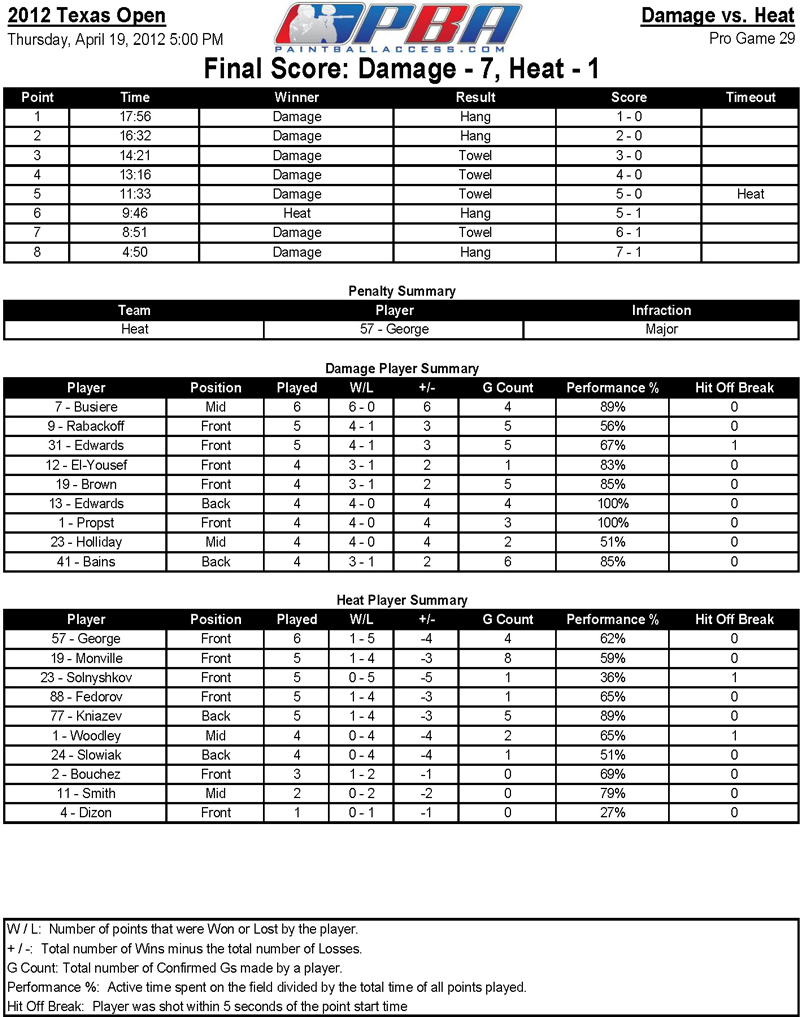 That’s fine! It’s their prerogative to publish what they want to, but my beef comes with the fact that these reports were still being created, and given to the professional teams after the games, up until at least the Chicago event.

If you’re creating these stats, why keep them close to the vest when they open the game up to a whole new level of dialog – which should be the ultimate goal of Paintball Access. Honestly, do any of you really care that Robert Aviles (#32, Mid) of the Los Angeles Infamous is currently the number one ranked player in the world? While it’s cool trivia, it’s not really essential information to know because Infamous didn’t win. Who cares? Great, the current best player in the world couldn’t win the event. Here’s another cool trivia fact: the number two player in the PSP, and thus tournament paintball, is Karl-Johan Samuelsson (#0, Front) of the Tontons Flingueurs. Here’s another: Zachary Sherman, of Omaha Vicious, continues to play at an extremely high level and came out ranked the number 7 player in the league. And finally, one more for good measure: San Diego Dynasty won the event, but only has one player in the Top 10. It’s Kyle Spicka for those of you who are interested.

Awesome. Cool factoids, but nothing more. Stats are not just a way to measure player achievement over a season, but should be focused on telling the story of a tournament, which begins on the game level. Instead of having to watch hours of tournament footage to put these player rankings into context, one should easily be able to see a “box score”, at least per game. Ideally each point should have a full break down of who eliminated who, from what position and the time of the game in which they were eliminated, but that is unrealistic for right now. However, posting these – correct me if I’m wrong – already created game scores should be the absolute minimum of what we consider a quality product.

I want to write a full article that details how Dynasty was able to win, given their incredible (or surprising) feat of not playing well – as the current PBA stats indicate – but can’t. I yearn to tell the amazing tales of how a Karl-Johan Samuelsson and Zachary Sherman have taken tournament paintball by storm, but feel as if my hands are tied! I’d love to write about how Robert Aviles has ascended to the top of paintball, but couldn’t will his team to victory, but cant! Not because of lack of trying or want, but because we need a way to give context to the game. Please Paintball Access, don’t take this as harsh criticism – I write this with a great longing, a pain even, for telling the story of the game, just like you, but humbly implore: Give Us Context. 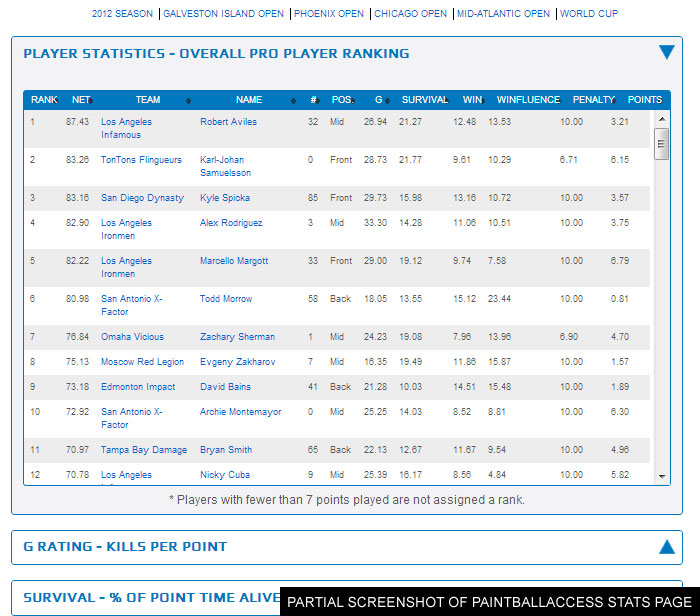