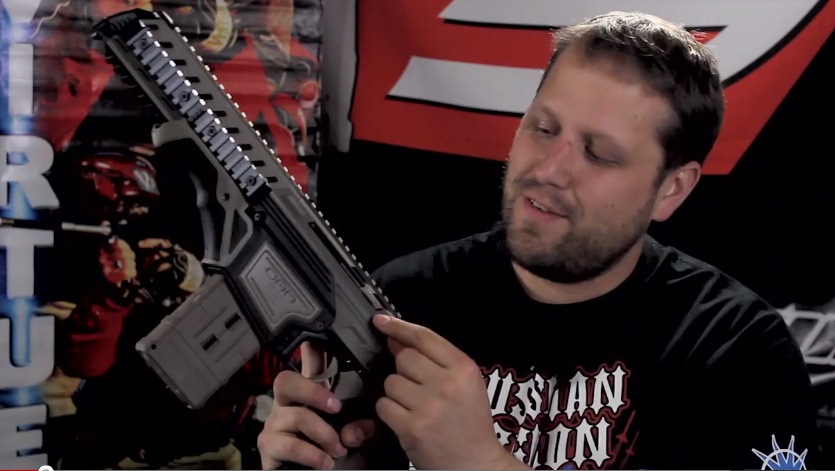 I received a DYE DAM in the mail recently and it’s awesome. Here I give an overview of the brand-new Dye DAM (Dye Assault Matrix) paintball gun that is magfed, First Strike Capable, and full auto. I then disassemble it to show how light weight it can be for speedball matches. It isn’t the first magfed marker on the market, or the first one to be able to shoot First Strike rounds, or the first one that did Full-Auto First Strike rounds, but it is the first the one to do it all. It’s the closest to the being the one paintball gun to rule them all. Allowing for multiple styles of paintball to be played with one gun: speedball, scenario, milsim, magfad, woodsball, and rec ball. Plus, it also looks like something out of a sci-fi movie.

The Dye Assault Matrix was built from the ground up to be the ultimate product for tactical players. We wanted to provide the industry with a stunning tactical marker that gives users the performance of a high-end tournament marker, as well as the aesthetics and features that tactical players need to thrive on the battlefield. The DAM™ has the ability to switch from a Magazine Fed system to a Loader Fed system with the flip of a switch, it can seamlessly change firing modes (semi, three round burst, full auto), comes standard with Picatinny rails for accessorizing, a gas-through frame, an easily maintainable bolt with a quick release system and built in hyper regulator, clamping feedneck, competition-style single trigger frame, Dye Tactical Sticky Grips, and much more. The Dye Assault Matrix delivers the perfect combination of performance and versatility, catering to all styles of play and giving users that edge on the scenario field that only Dye can provide. The weight of the DAM™ is 4.76 lbs without the clip.