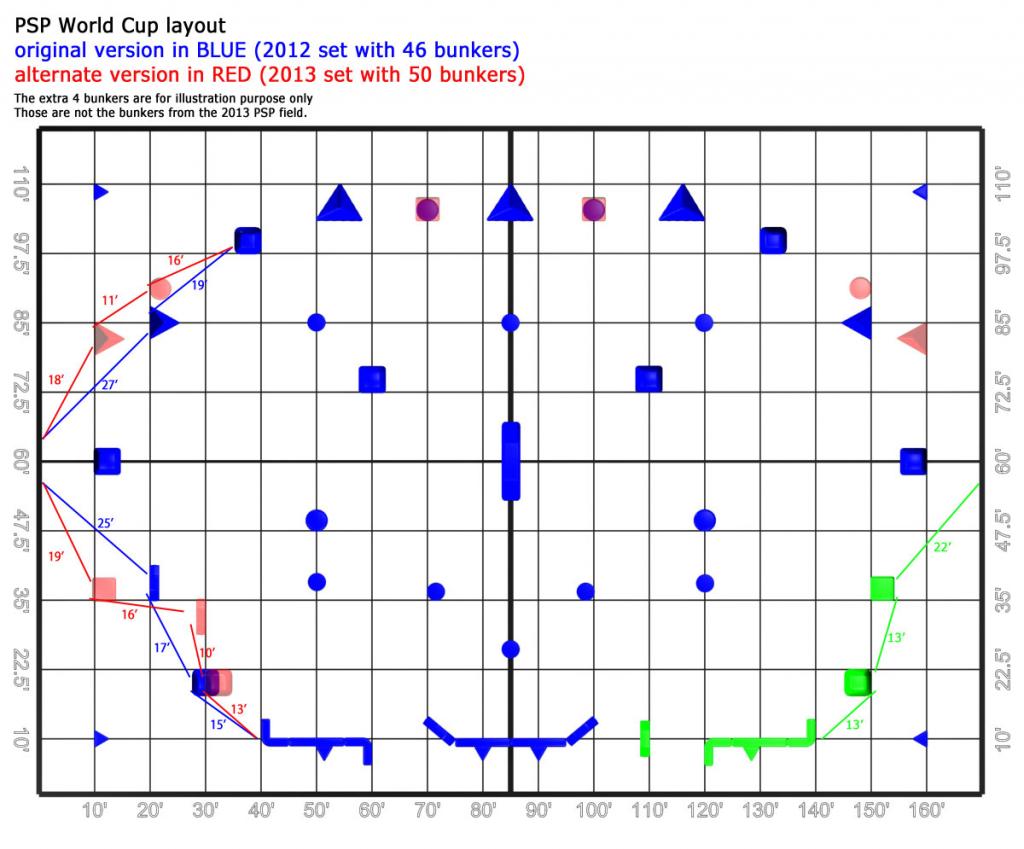 Sup’AirBall just dropped some new information in regards to their plans for the future PSP layouts in the 2013 season. Last year, the company created the new, slimmer and shorter snake bunkers that we’ve seen being used throughout the year. Onlookers as well as tournament players, have and continue to complain that the snake bunkers should not have been altered in any form. Some would even go so far as to say that the newly altered bunkers have hindered some (heavy set) players ability to play the snake effectively.

Well, this year, Sup’AirbBall seems to have decided to adhere to the slower out-of-shape players, as well as the need for more bunkers on the field, with such a widespread layout. When the PSP made the change in layout width, it left a void near the wider sides of the field; a void where multiple lanes of paint awaited a sprinter, who had dozens of feet to run in order to make a good bunker. Sup’AirBall and PSP are looking to remedy this issue, which would provide players the ability to move bunker to bunker with a shorter distance in-between than before.

One of Sup’AirBall’s representatives, by the name of Damien (AdrenalineGames on PbNation), has made the information public on their message boards. To break things down, the previous PSP layouts contained 46 bunkers, the new layout(s) will have four additional bunkers, which will be placed toward the back and outer edges of their future formations. One of the biggest issues every offseason is new bunkers and field owners being forced to buy the upgrade kits to provide their sponsored teams the opportunity to practice on them.

Aside from the fact that field owners will again be forced to buy the new upgrade kits, there is some good news stemming from this announcement. For instance, the new upgrade kits are said to cost next to nothing to purchase, compared to last years fee. Also, Sup’AirBall has promised that there will be no new shaped bunkers for the 2013 season. This change is said to promote more gun battles, which will be inevitable due to smaller sized lanes allowing players to make a successful sprint to bunkers more often. Above is a preview of what the World Cup layout would have looked like with the new bunkers implemented into the system. Looks like we’ll be seeing a lot more gun battles and runs to the 50 snake and dorito in 2013.

We would like to hear from fans and players of the tournament paintball scene. Will this addition be a great one for the 2013 season, or the exact opposite?

Just want to make this clear: those 4 added bunkers don’t/won’t have a specific place on the layout. They won’t be back bunkers more than front bunkers. They are added onto the field to promote progression/faster games.

The layout provided was to show that adding 4 bunkers will create shorter gaps, thus easier progression down the field. This is just one of many possibilities. – Damien – Sup’AirBall