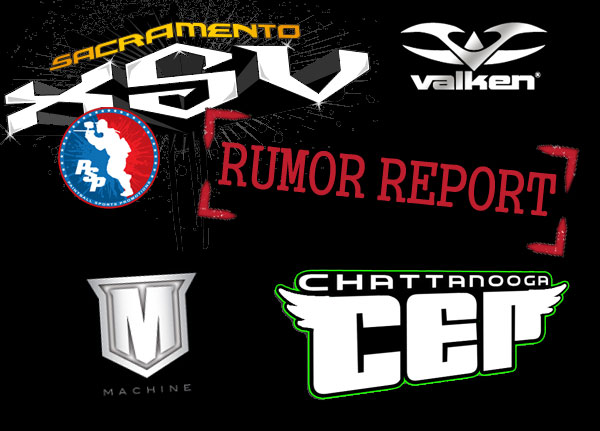 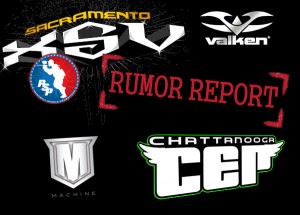 Welcome to the first ever Rumor Report by Social Paintball! In these posts you will find the hottest and freshest rumors that we can possibly muster. We would also like to introduce a new staff writer who is dedicated to lurking in the shadows, finding out every juicy bit of information that he possibly can get: Peter G. Burnell. Mr. Burnell is a veteran of paintball and has sources in every imaginable facet of the sport. We are sure that he will bring a completely new dimension to Social Paintball as we try and provide you with the best possible coverage of the game. Also, please remember: these are simply rumors. Things that Peter has heard through the cracks and because of this, we cannot claim to know them as 100% truthful. Again, please give a warm welcome to Peter and enjoy!

– Social Paintball
————————————————————-
Welcome boys and girls to the first edition of the Rumor Report by Social Paintball. I’m your guide, Peter Burnell and I’ll be taking you behind closed doors and into the dark alleys of the sport of paintball. First, if you want to know a little about me, just read my bio at the bottom of the page. You thought I was going to write more than I have to? No.

Rumor: XSV will be playing at the PSP World Cup, in the professional division.

Certainty: 90%. We ran into this tidbit just yesterday from a very reliable source. But if you’re a paintball player, you know a team is not going to be at an event until the dinero is on the table.

Rumor: KEE is coming out with a marker said to look and perform a little like the Luxe.

Certainty: 70%. This seem inevitable from the KEE guys, but I wasn’t able to get any idea of where they are in the production of said blaster of paintfilled balls.

Rumor: Machine Paintball, the company that makes the Luxe-esque “Vapor”, has a loader coming by World Cup.

Certainty: 100%. Again, it only seems like a matter of time for this young company to get into the mix further than just a sixteen hundred dollar blaster. And certain video posted lends credibility to the rumor, too.

Rumor: PSP Division 1 team Avalanche (who is owned by Frank Connell) forfeited a game on Sunday against T1 Topgun Union, that would have decided who came in third place for the PSP MAO event, because they didn’t want to pay for paint.

Certainty: Well, APPA says that the game was forfeited and ya know…in these economic times…

Rumor: Tampa Bay Damage is in a contract year with both GI and DYE, meaning that the team will have some decisions to make at the end of the season. Seeing that Tampa has virtually become the flagship teams of both DYE and GI, I’m doubtful the team will elect to move from either stable. However, how happy can either sponsor be about Damage pulling out of the Millennium? I’ve heard rumors that GI was not a fan of the move. Either way though, I don’t think it will affect the status of the team with their current set of backers though.

Rumor: Valken Paintball may be hosting their own tournament series. We think it’ll be a Pro/Am event, with three locations (Los Angeles, a mid west and east coast location). Oh yeah, and I heard they’ll be giving away 50k an event. Wowza.

Certainty: 100%. I know for sure that it is something Valken and Gino are thinking about per a recent Social Paintball video interview. Thanks to the other guys here at Social for blowing the lid off of this one and ruining it for you all.

Rumor: Davey Williamson to return to a professional paintball team.

Certainty: 80%. It was on his Facebook, so it’s gotta be true? Amirite?

Certainty: 30%. I’ve heard this bounced around by a few people in various places, but I’m inclined to think it’s bogus. The rumor I’ve heard goes something along these lines: “CEP will disband to focus on their field and building paintball in the South East.” Honestly, the guys haven’t had much success in the professional ranks and they may be nearing their expiration date, so it wouldn’t surprise me if you didn’t see them around in their current capacity next season.

Rumor: Social Paintball to introduce a completely new product in the near future.

Certainty: I’ve only been around a little, but the guys have been talking about something really cool coming down the pipeline. Possibly. Maybe.

Rumor: Babies are on the way for a GI sponsored team. How many babies? I’ve heard 400.