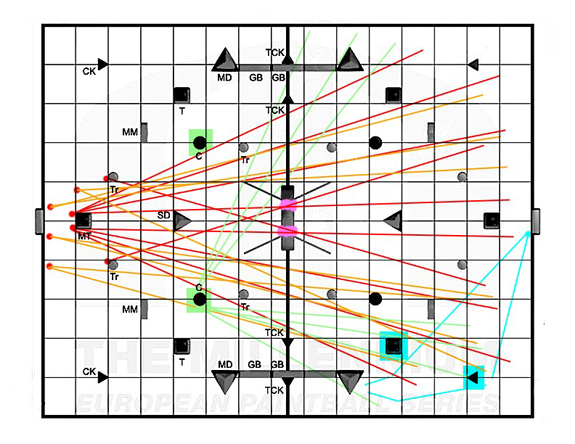 Do you approach a paintball field as a chess game? Do you think you are a master tactician who spends hours upon hours playing Command and Conquer? Do you have any idea what Gain, Control and Anchor mean? Ever want to probe into the mind of a professional team’s coach to figure out what he is looking at during a game? Or, are you a new player just trying to figure out the basics of the game? If any of these apply to you, then you will definitely be interested in this Guest Series provided by Tampa Bay Damage coach and paintball mastermind, Paul “Baca Loco”Richards. Coach Richards has a long history of coaching teams in Florida and currently coaches Tampa Bay Damage, who is tied at 2nd place in the overall PSP standings. Since then he has gone on to win four championships, including a World Cup win (which was also number two in a run of three straight first place showings) and has been on the podium 11 times. Aside from coaching, Richards is also a prolific paintball writer and was a staple of the now-defunct Paintball Games International (“PGi) magazine where he did gun reviews, event reports, the occasional feature, How-To’s & a monthly column entitled, View from the Deadbox. He currently operates the blog Viewfromthedeadbox.blogspot.com where he is also posting this series. We would like to thank Coach Richards for his insight!

Basic Tactics #1: The Foundation
Is really strategy basics and since this is a back-to-basics series I’m going to begin at the very beginning. Most (Everybody) will already have a working understanding of basic strategy but I’m going to put it in the same context as basic tactics so that it will (hopefully) be readily apparent how the one flows from the other. Basic strategy will provide the foundation for the brick wall of tactics to be built in future posts.

Before I get started keep in mind that strategy is the overarching concept and not the how-to. Tactics is the how-to so in this post a lot of ideas we all normally begin to tack onto the basic strategy isn’t strategy but is, in fact, tactics. That means this post is going to be done in very broad strokes. (We will fill in the details as we go through the series.) Even so the boundary between strategy and tactics is frequently blurry. It doesn’t matter. What does matter is to see how the pieces all begin to fit together.

All strategy in competitive paintball is derived from the necessity to win points. Yes, even defense. This is true because in the game as it is currently played there is no pure defense; defense is merely a delaying tactic used to create (when it works) actionable situations for offense. For example, Team A knows Team B is aggressive. Therefore Team A’s strategy is to set up in a defensive formation that minimizes their risk with overlapping fields of fire and hope to eliminate members of Team B trying to force the action. If successful that strategy will create a situation, say two eliminations, on the field wherein Team A shifts to offense in order to finish out the point. This is the very common counterstrike or conditional offense almost all teams employ much of the time. Some teams are more defensive (or less) than others but the strategy is the same. 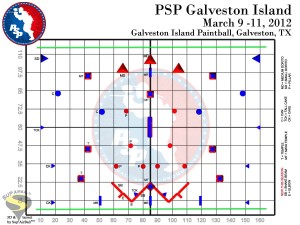 The dominant feature of all current game strategy can be summed up as Gain the wire, Anchor the wire and Control the wire. The reason this is so should be obvious to anyone who has played or even watched a few games; corners are the most defensible positions on the field. They can only be attacked from an increasingly open angle from one side of the field. Thus, reduced risk. This factor alone creates advantages for the player or team that can take, hold and use a wire to engage their opponent. (Even when corners are intentionally inset or reduced to tiny props it only lessens, not negates, their strategic value.) The flipside is equally important. To ignore or lose a wire gives your opponent a clear field of attack from which you can’t ultimately hide.

The occasional complaint about the repetitiousness of multi-point field layouts should instead be understood as the fundamental strategic reality of the competitive game as it is presently played.
Let’s return to Gain, Anchor & Control for a moment. Given the point begins with all live players at the center point of each end of the field the first requirement is to get a player out to the wire alive. Whenever and however that is accomplished that is Gain. Anchor usually begins with a player established in the corner. (This can change as a point plays out. The anchor can–and frequently should–move. More on this another time.) Worst case scenario Control means that even when contested a team (players) can use a wire to some advantage and best case scenario it means dominate a wire.

Strategy is formalized in the game plan. It defines the initial method(s) the team will utilize to open game play. The game plan can also define player roles. (These frequently shift during play.) Given that paintball allows for free player movement at all times the game plan cannot blueprint each point from beginning to end. Young teams tend not to use or rely on formal game plans and the result is sometimes readily apparent but others times not. This is because of the broader range of talent (or lack thereof) & skills in the lower divisions. Native talent, better developed individual skills and on field unit execution can all overcome the game plan but as the margins narrow and the players become more equal the game plan asserts its value. Better to get into the habit early on than try to incorporate it later. (More about the game plan next time.)

Expect the coming posts to cover stuff like the Beginners game, Basic Defensive, Rudimentary Offense and then apply those ideas to the Breakout, Mid-game and End-game.

Again, we thank Coach Richards for his valuable insight and we are anxiously waiting to hear more from him in the near future! If you are interested in reading more from Paul, we encourage you to visit his blog, Viewfromthedeadbox.blogspot.com