Off the Break Efficiency – Part 1

After the first event of the year we took a look at the numbers provided by the PBA Stats Crew (thanks to Cade Coleman and Friends for all the hard work you do) to see who is the best team in the land was, Off the Break. To do this week took into account how often a team was being eliminated off the break, and how many eliminations they created, thus creating a “Break Efficiency” statistic. Our calculations revealed that after the first event the Los Angeles Ironmen lead the pack in Off the Break Efficiency (at 13%) and Tampa Bay Damage averaged at least one elimination 42.85% of the time (a league high at that point). In the bottom of the 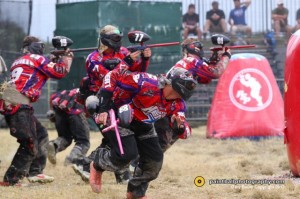 bracket we found that Chicago Aftershock lead with a -17% efficiency rating and only averaged elimination in 15.38% of their points. In this article we have re-crunched the numbers to see how the teams are faring at the midway point of the season. If conventional wisdom holds, the teams who are at the top of the overall PSP standings should also be at the top of our numbers. Will it hold true?

Moscow Red Legion:
The Moscow Red Legion was on fire during the PSP Chicago event, having multiple games where they eliminated 5+ players off the break. Kirill Prindhiki (#75, Mid; 15 PBA rank) stated in a post match interview that the team had focused on their off the break lanning and that the extra practice was paying dividends for them. On the season they have amassed 70 eliminations in 17 matches during the first ten seconds of the game, which puts them at an average of 4.11 otb eliminations a match.

San Diego Dynasty:
San Diego Dynasty has come out flat two events in a row, but during their second day in Chicago they looked stunning off the break when compared to the rest of the season. On the 2012 season they have played 14 matches, with 48 otb eliminations, giving them an average of 3.42 otb kills a match.

Houston Heat:
People predicted success from Houston Heat, but I do not believe that many predicted this much success. They have looked brilliant for most of the season and their numbers reflect it for the most part. Houston has acquired 74 off the break eliminations this season in 17 matches, putting them with an average of 4.35 off the break kills a match.

Seattle Thunder:
In their rookie season, Seattle Thunder has done relatively well with an overall record of 4-13. Yes, they have taken their thumpings at each event, but they have also been competitive in many games that the experts thought would be a wash. Also, this season they have averaged 2.61 eliminations a match, receiving 34 kills in 13 matches which puts them a the bottom of the league for off the break production.

Omaha Vicious:
Omaha Vicious has acquired 46 off the break eliminations in 13 matches this season, giving them an average of 3.53 eliminations a match. This number may be slightly skewed downward because PBA is missing the numbers for one game against San Diego Dynasty, which tells us that Omaha Vicious is quite good at lanning.

Chicago Aftershock:
As the young Chicago Aftershock becomes more accustomed to the speed upon which the professional paintball game is played, this number will surely only go upward, which is encouraging for both the fans and the organization. Currently they are sitting on 31 off the break kills in 12 matches, giving them an average of 2.83 off the break eliminations a match.

Team Infamous:
Team Infamous has had their ups and down this season, with a high point coming in their hometown of Chicago, but the one thing that has been wickedly consistent for the team is their off the break production. They have garnered 77 off the break eliminations in 15 matches, which puts them at an 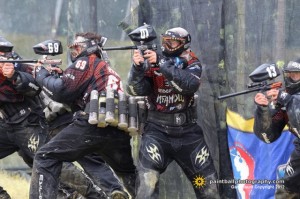 astronomically high 5.13 off the break eliminations a match. If this trend keeps up, Infamous is due for more success as they continue to develop their offensive identity.

Los Angeles Ironmen:
With a virtual wall of paint – known as Mike Paxson – leading the charge, you could bet that the Ironmen were going to do well in this analysis, however should they be doing better? On the season they have managed to acquire 68 total off the break eliminations in 17 games giving them an average of 4.0 eliminations a match.

upTon 187 cRew:
Sitting just above the Chattanooga C.E.P and Chicago Aftershock in the over all rankings, upTon 187 cRew has done fairly well in their off the break production this season. They have eliminated 36 opponents in 12 games, giving them an average of 3.0 eliminations a match – not too bad for the rookie team.

San Antonio X-Factor:
San Antonio X-Factor has had a relatively good season and while they are not at the top of the leader board, they have looked poised to find continuous success. Currently they have 66 off the break eliminations in 15 games which gives them an average of 4.4 kills a match.

Chattanooga C.E.P:
Chattanooga has had some bleak moments during this season, however their off the break numbers are not terrible. They currently have amassed 35 eliminations in 12 matches, giving them an average of 2.91 eliminations a match. This puts them ahead of Chicago Aftershock, and Seattle Thunder.

After looking at the break down of Average Eliminations a match, the PSP standings at the midway point in the 2012 season look like this: 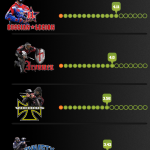 Anything really strike out at you? How about San Antonio X-Factor sitting in the number three spot? Or, how about San Diego Dynasty having more trouble getting an elimination off the break than Omaha Vicious? 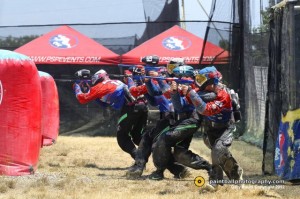 While it is interesting to see where the teams fall, the most interesting thing to me is the gap between the top and bottom six. The top six teams in the league are averaging a combined 4.47 off the break eliminations a match where as the bottom six are sitting a putrid 3.05 – a huge drop off. Interestingly though, the difference in the top team (Infamous) and the number six placed team (the Ironmen) is a larger than the difference between the number seven (Omaha Vicious) and the last team in the league (Seattle Thunder): 1.13 versus 0.95.

So there you have it! A look into who is preforming well this season, specifically off the break. As a writer I cannot express how exciting it makes me to have these numbers to work with and I honestly believe that they are changing the way we interact with the game. For more information on paintball statistics, head over to www.paintballaccess.com and be sure to check back on Social Paintball as we continue break down the numbers in our second part of this article where we look at the eliminations each team took and how it impacts their overall efficiency. After all, getting kills is fun, but staying alive and winning is what the game is about.