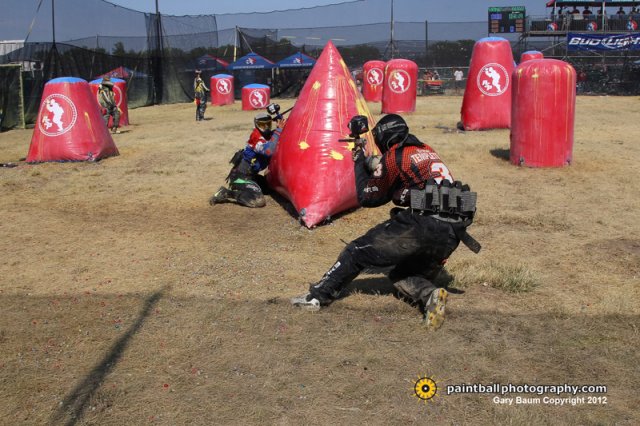 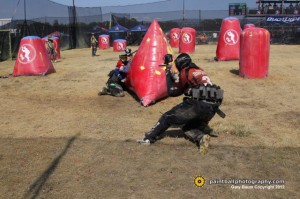 Team Infamous won their second event of the season, their first PSP event, last month at their home field of CPX Sports in a remarkable fashion – defeating the Moscow Red Legion (4-3) in overtime! We looked at the tape and tried to come up with a new edition of The Playbook similar to how we did for Houston Heat last event, but we honestly could not. It became apparent that Infamous was happy with playing a virtual symphony of paintball using the theme and variations technique as their base material. That is: they created one game plan (the main theme) and from there only tweaked it slightly (the variations on a theme). In college football terms, “they pulled a Nick Saban.” For this event, it worked masterfully. 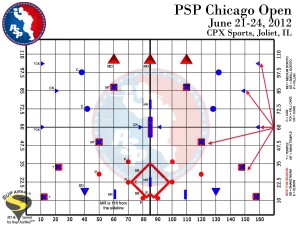 The lynchpin of this game plan was the use of the 30-Can on the Dorito side of the field and the 40-Maya Temple on the snake side. Using these two bunkers Infamous was able to lock down the opposite ends of the field. Once Infamous got into these bunkers it was only a matter of time before the opposing team ran into a ball or two, which allowed Nicky Cuba (#9, Mid; 15 PBA rank) and co. the opportunity to get to the 50-A and further press the middle advantage established off of the break. Also, it appears that any other bunkers taken off of the break were designed to isolate the individual sides of the field — especially on the snake side — and force players to engage their own side instead of crossing the field and playing damage control in the center. Of course, the Kryptonite of this plan is a team who can effectively eliminate players off of the break. When the stats come out it will be interesting to see how many games Infamous won when they made it into their primary bunkers with five alive versus how many they lost when they were down a body early. That being said, Infamous did win the most important point of the tournament down a body, however it is hard to place that victory on the design of their play and not on the flaws of the Red Legion. 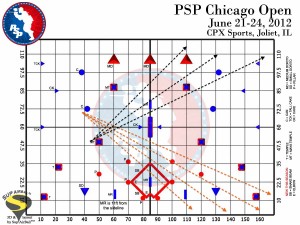 In fact, in a wonderfully ironic twist of fate, the play that Moscow ran during that last point was the “bread and butter” design of Infamous: two in the middle, spread the field. No wonder Moscow lost the point! Infamous had been running this play all event and obviously knew the weakness, which was to push the issue too early and in the wrong direction. In my opinion, the crucial mistake that the Russians made was moving into the 40-Maya Temple on the dorito side of the field, instead of moving to the 50-A. Although we saw teams successfully playing this bunke (the 40-Maya)  it was only when the player in the MT was devoted to shutting down the snake side.

Below is a diagram of the last point. The path of Infamous is the orange and Moscow the red. The green lines denote shooting lanes and the black X’s denote an eliminated a player. 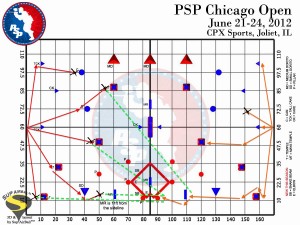 When Brad McCurley (#13, Front; 56 PBA rank) launched from his position at the snake side 10-Temple, Moscow had three players looking to the doritos. Making matters worse, two of them (the 40-MT, snake side and 45-MT, dorito side) were so far up field that a player in the snake could easily gain dominance, making their bunkers virtual islands. Also, Aleksandr Berdnikov (#11, Back; 3 PBA rank) was rendered completely useless in the snake small-dorito due to heat from the back dorito corner, home and presumably McCurley. This leads me to believe that Moscow was about to make a play to the tapelines and attempt to squeeze out Infamous, as they had many other teams during the event. However, McCurley notices that the cross field lanes controlling the snake are not active, and knows that if he takes the inside move his mirror is blocked out by the lane blockers in the snake, and makes the move to snake-1: the small A.

Because of the lack of attention to the snake side, McCurley owns dominance and the blood bath begins. He first eliminated the 40-Maya Temple, recognizes that the snake corner is not holding the tapeline effectively, which allowed him to move into the 50-snake and gain dominance on the dorito 40-Maya Temple (who is still looking the wrong direction), and grab the elimination. He then eliminated a stumbling Berdnikov who seems to have tripped when he began his move, and then put the heat on another Moscow player who had moved from the dorito corner to the 10-Can. All McCurley had to do was back up a few feet and he had a beautiful shot on that bunker. From there it was an easy task to polish up the last player in the snake corner.

What was Moscow thinking? Did the heat get to them? Had their player who was the first of the “McCurley 4-Pack” moved from the dorito 30-Can to the 50-A, this game could have been an easy win for the Russians. Instead, the last minute and a half of the final point of the finals match made them look confused, disorganized and not focused. Also, why was Berdnikov playing the snake? Yes, he is a total killer as he is ranked the #3 player in the PSP, but he did not look comfortable in his role.

Major “kudos” goes to Infamous for sticking to their game plan and trusting in it, even when it was blown open during a sudden death over-time match against one of the best teams in the world. Their style all event was to chip away at teams, not taking “too big of a bite,” and forcing other teams to make mistakes which would play into their hand perfectly. To Coach Todd Martinez: it was beautiful to watch and we hope to see more from your team in the future. 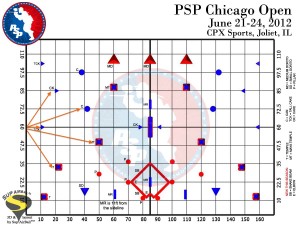 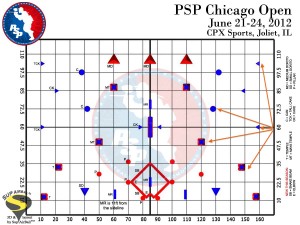