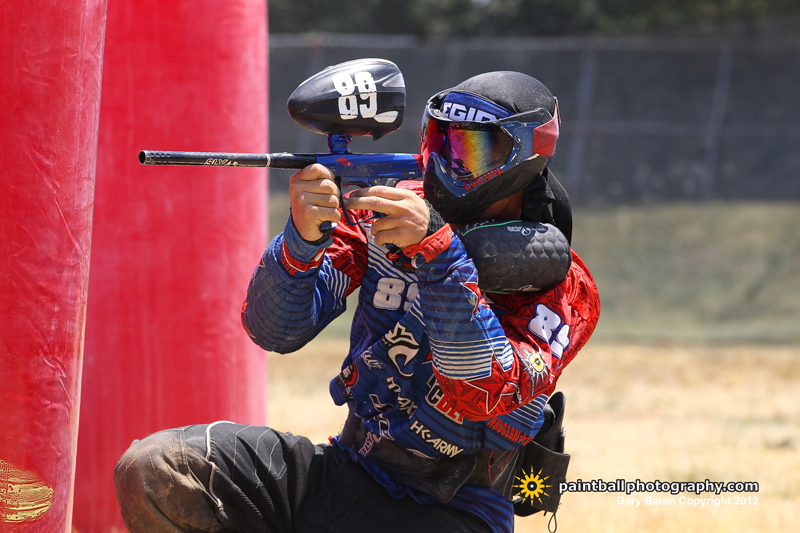 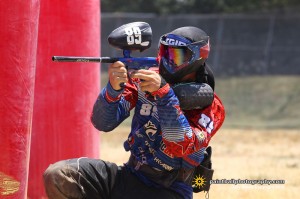 Photo by Gary Baum of paintballphotography.com

Thank you so much for taking time out of your demanding schedule to interview with me Jason.  Watching you and the other players of Moscow Red Legion dominate the field by ferociously attacking off the break at PSP Chicago was incredible!  Many hours of coaching, training, and dedication definitely paid off.  RL played incredibly strong and aggressive during all of their games and every player on the team, as well as the coaches and trainers, has once again earned my highest respect.

MC: What changed between Phoenix and Chicago?

JW: Coming off of a 2nd place in Phoenix to Heat was a big blow that motivated the team into pushing harder for the next event but also, it was proof to us, our fans and the community that the new RL had the potential to still podium at events.  I think all the players went into Chicago highly driven to have a successful event.  With that said, when every player and coach has that mindset, it’s hard to beat.

MC: Your first game on Friday in Chicago against Dynasty was dynamic.  I know what was going through my mind when there was 10:07 left on the clock, Moscow Red Legion had scored 6 points, and Dynasty had not put a point up on the board yet.  What was going through your mind at that time?

JW: Well, we have thrown away leads before but the way our break shooting was going; I felt that we had everything under control.  The story of that game was shooting people off the break.  We dominated that aspect and when we do, that’s when we control teams and are at our strongest.  Heading into our first match of the day and the first match of the event with a 7-0 win against Dynasty really did concrete the motivational attitude of the team and send a message to the other teams at the event that we are a team to be feared.

MC: Moscow Red Legion is definitely a team to be feared as well as a team to be loved.  Because of RL’s incredibly aggressive and relentless competitive nature, all of the players, trainers, and coaches of the team have earned my admiration and respect of over the years.  Congratulations on all of your wins at Chicago.  I didn’t miss a single game, just about lost my voice during a few of them from cheering, and rarely ever miss a live webcast of any of RL’s games.

Moscow Red Legion won all of their games at PSP Chicago except for the final battle against Infamous that ended up going into sudden death overtime.  There was never a doubt in my mind that RL was not going to win.  It was only 2:23 into the game when RL scored the first point in the final game.  The next point was a slow point and Infamous tied it up 1-1, leaving only 8:58 left on the clock.  Infamous ended up conceding the next point and RL was on top again 2-1.  Because I am such a hardcore RL fan, I cursed Infamous’ name when they scored only a little over a minute later to tie the game 2-2.  They were playing strong but I never believed they would play stronger than RL.  It was no surprise to me when RL took the lead again by scoring shortly after and leaving 2:43 on the clock.  What did surprise me was when Infamous tied it up 3-3 and left only 1:19 on the clock.  I still believed that RL could get that point, knowing that so very much can happen in just one minute of a professional paintball game.  It went into sudden death overtime and even though Nicky Cuba got shot off the break, Infamous pushed hard and won the final game 4-3.  Yes, RL had lost their final game but I had not forgotten how hard they worked for their many victories leading up to this moment.  I am still very proud of all of you.

MC: What did you learn from your experience in Chicago?

JW: Infamous played very good in Chicago.  They were looking solid the whole event long.  I feel that we did make mistakes in that final game not taking anything away from Infamous but we did make errors that resulted in a good team taking advantage of those mistakes, which in the PSP, on Sunday while in the finals, there isn’t any room for. The team and everyone in the league has no doubt that we are a top tier team just like RL always has been but our next step is 1st place for New Jersey and Cup.

MC: There is no doubt in my mind that you and the other players will learn from that final game and use what you have learned to train even harder for New Jersey and Cup.  I still remember many of the details of all of your games leading up to that final game and I’m sure my neighbors remember it too thanks to all of my cheering and jumping up and down while watching the live webcast for 3 days in a row.  There were some remarkable plays made by RL during those games and many were made by you.  How did you personally prepare for Chicago?

JW: I practiced a lot in the week alone and did a lot to practice on basic skills such as break shooting, gun fighting and running and shooting as being good at those really does put you steps in front of your opposition.  I knew it would be very hot, just like Phoenix, so I started to hydrate weeks before the event to leave no chance of my physical fitness getting in the way of filling my role as a player on RL.

MC: I had not thought about the importance of hydrating so early on as part of your training.  That’s something I think many paintballers overlook, including myself, and it can definitely make or break an athlete’s performance.  Speaking of training, would you be willing to tell me and our readers more about Project K? 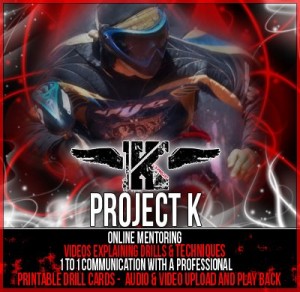 JW: Sure! So, the Project K is an online training system.  The idea of it is to have a direct and consistent link between you, as an individual, or your team with a professional player.  For example, if you’re a team that needs professional ongoing advice, you’ll sign up and get your own team area with the team roster and a display picture for each member.  The coach will get a background story of your team and learn more about the group to have a better idea of your experience and ability as a whole so the activities you receive are as beneficial as possible.  You’ll then receive things, such as drill cards, that you can print off and take to practice with you as well as videos demonstrating all aspects of paintball.  We even include barrel cam footage of your coach playing and parts of the video are paused and narrated by your coach explaining different situations and scenarios on this specific field that will compliment field analysis and break down for different layouts when they are released by your respective league.  To keep connected, your coach can contact you or the team on the account via text based mini-forum or audio uploader so you can hear you coach talk to you.  It really is a completely unique and different approach to progressing in paintball and it’s exactly what the sport needs.

MC: That sounds like a huge advantage for both players and teams.  Having professional coaching at your fingertips is remarkable!  I understand that Loic Voulot of TonTon started Project K.  When did he start it?

JW: Loic started the Project K 3 years ago and now is currently at 300 members in France.  This year, he expanded to Russia with Kirill, Germany with Pat, and to the UK as well as other English speaking customers with me and Tim Montressor in the USA.

MC: With all of this expansion of Project K, do you have any success stories you’d be willing to share?

JW: I could talk about winning events, as every podium is a success story, but honestly my biggest accomplishment was making it onto Moscow Red Legion. I watched RL in 2005 in London at the EXL Millennium event and was 15 years old and remember telling my Dad I want to play for that team some day when I’m older, so for me, personally as a European player making it onto such a high profile team and playing in the PSP, that is my biggest success story to date.

MC: As you, and probably everyone in the paintball community who has stumbled upon my Facebook page know, RL is my favorite professional paintball team that plays in PSP and I am absolutely thrilled that you are such a dedicated part of such a strong team.  Wishing you continued success in everything you do Jason.  Thanks again for the interview.

For details on gaining a professional coach for you, as an individual, or your team visit www.The-K-Project.com or e-mail jason@the-k-project.com