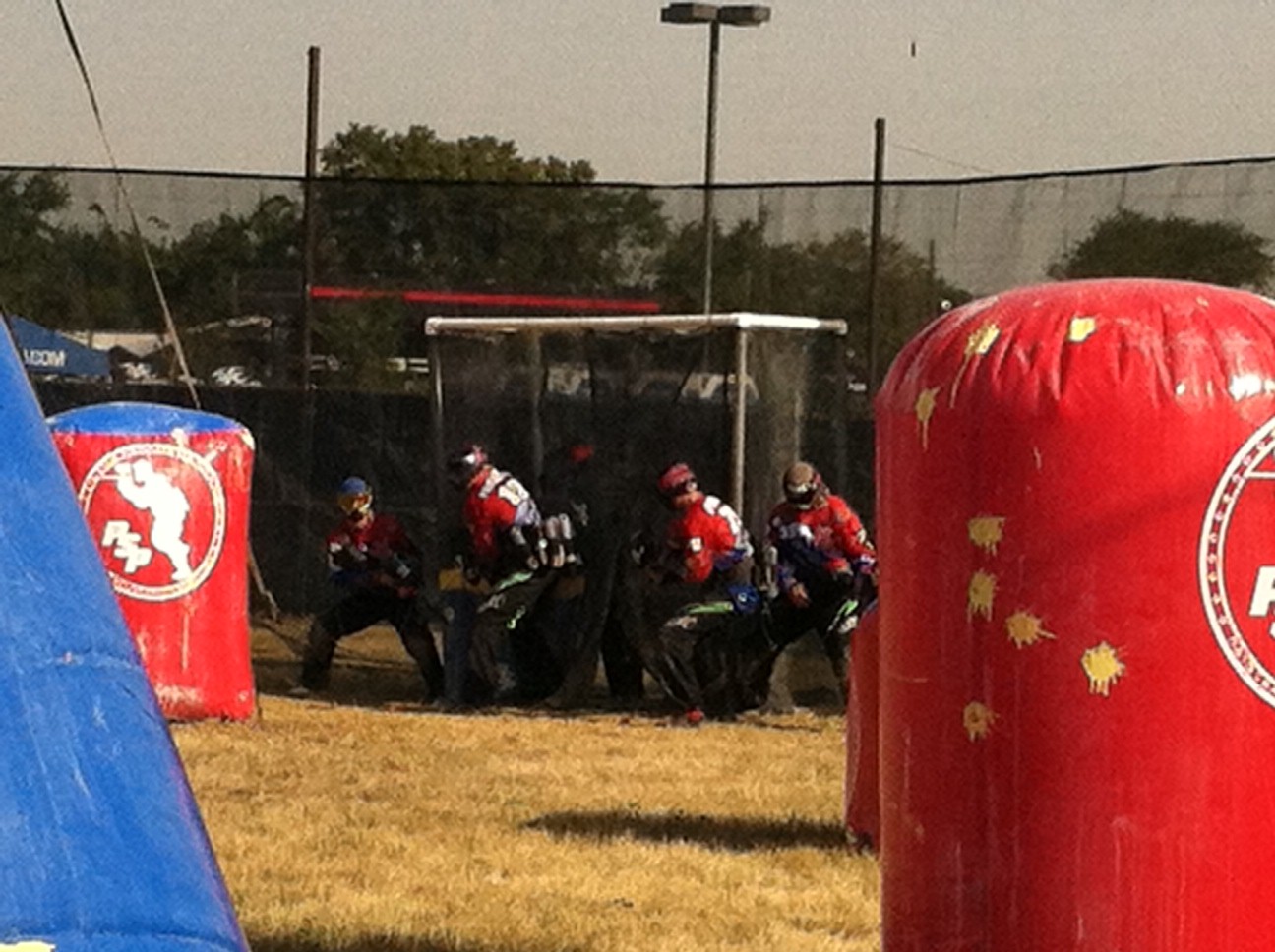 The first point started out to heavily favor Houston, however San Diego was able to grind it down to a long 2v2 with Ryan Greenspan and dalton Vanderbyl splitting the corners. Eventually, Heat was able to close out the game with a brilliant shot from snake two to Vanderbyl’s neck which elicited an “ooohhhh” from the crowd. The next point was conceded by Houston, but Chad George acquired a major penalty. Score, 2-0. The play of Sam Monville and Chad George is very impressive on the snake side of the field as both have looked very comfortable in their roles this weekend, however they could not get anything going on the snake side. Houston is one of the few teams that has been able to push through the snake and be successful this event, however the play of Alex Fragie may have curbed them to try other plays. On the dynasty side, I cannot express how much I have enjoyed watching Ryan Greenspan this weekend. He is a calm, cool and collective paintball player. His being on the field is important for Dynasty. Houston simply lost focus and did not look like they were in the game during the last few points. Talking to Steve Rabackoff yesterday he mentioned that this could be a trap game for the Houston squad as they have not yet had a real test of their abilities. This was an important victory for Dynasty, and the margin of score put them in good contention to make it to Sunday play.

Seattle Thunder continues to impress me with their over all maturity as a team. Although they still do not match up well against the top teams in the league, they have no problem going toe to toe with teams that they feel are beatable. Against Omaha vicious they were very methodical, taking their time down the middle of the field which provided many inside shots on vicious, who never really got wide enough to counter the push. Seattles game plan was obviously to make vicious play an aggressive game – several times team Captian Corey Fields came onto the field with upward of 7 pods on his back. In many situations this plan back fires completely but a team who is not completely organized and on the same page can be defeated by simply running into their opponents guns, which is exactly what vicious did. Omaha looked fantastic with the score being 6-4. They won a quick point making the game 6-5 with 33 seconds left on the clock. They playednwithna rage that I have not seen from the squad andninbelieve it fits them well. However, they still Lost several unnecessary bodies in a last second rush, which shows a lack of organization and communication. We see a definite rivalry brewing from these two teams.

Moscow (6) vs Aftershock (4)
Both teams are here and currently gearing up to recap, Moscow won both games yesterday which included a 7-0 max of San Diego Dynasty. Chicago Aftershock dropped both of their games, but looked competitive against Omaha Vicious. Just to give you a perspective, I am sitting in the pro pits/dorito side.

Chicago begins the game with a strong break out, heading to snake 1 off the break, with the momentum headed toward that side of the field. Moscow counters with a dorito push which seems to be typical of this field. Marcella Margott polishes off the last Aftershock player making the game 1-0, Moscow. This is a fairly promising start for Chicago. They made several eliminations, but their panning seems to be tighter than it was yesterday.

In the second point Chicago played well and brought it down to a one versus one – but could not close it out. Also, the Legion picked up their first penalty of the event on the snake side: a 2 minute major. Score: 2-0, Moscow.

Point three saw a clean break out from. It’s teams with Chicago making it Into snake 1 clean and eventually get wide on the d side. It looked as if Chicago had the point, but Marcello Margott of Moscow dominated his mirror in d1, which created a 2 on 1. To save time on the penalty Chicago blew the buzzer to call the game. Score: 3-0.

Chicago makes a terrible mistake in the next point, as they were only able to get four bodies on the field before time began. The Moscow game plan looks very similar to Tampa Bays – control the snake, contain tape dominance on the Doritos and push the middle. It seems as if the teams who slow play this layout win more – which is not the style of ball Chicago wants to play. However it back fires as Chicago is able to put together some brilliant individual play and still win with 4 alive. Score: 3-1, 10 min left.

Very different breakout from Moscow- the broke very wide, possibly the only time we have seen this in the event. This takes Chicago off guard, quick point with Marcello (again) making a statement. 4-1.

Chicago begins with only 1 person shooting off the break? Very unconventional for this field. We have main,y seen 3-4 guns up with possibly one runner. Chicago is a very scrappy team, which makes it hard to not be able to root for them. They win the point, 4-2.

It seems that coach Bruno is intent on capturing the momentum, sending a player to the A off the break. He makes it in clean, yet can’t stay alive. The Russians are phenomenal at playing on their heels. They play down a player, or on the back line better than any other team, but can’t close it out as a Chicago player comes through the A and torches the remaining player on the dorito 2. Also, 69 of RL seems to have twisted his ankle pretty badly. 4-3 with 3:14 seconds left to go. Moscow is in a precarious position, which is not expected at all.

Chicago starts with one in the dead box, serving a minor penalty. As good as Moscow is playing down a player, they are even better winning with a player up. Moscow wins easily. 5-3.

In the next point Moscow receives a major penalty which blows up any support they had on the dorito side, but Chicago forgets the flag halfway down the field. The crowd had to yell “flag! Flag,” before they turned around. 5-4.
Chicago is really pouring their hearts into this match. There is a sense of desperation we have not seen from them yet.

In a last ditch effort Aftershock attempts a total run through, loosing the match with a score of 6-4. Fantastic match.