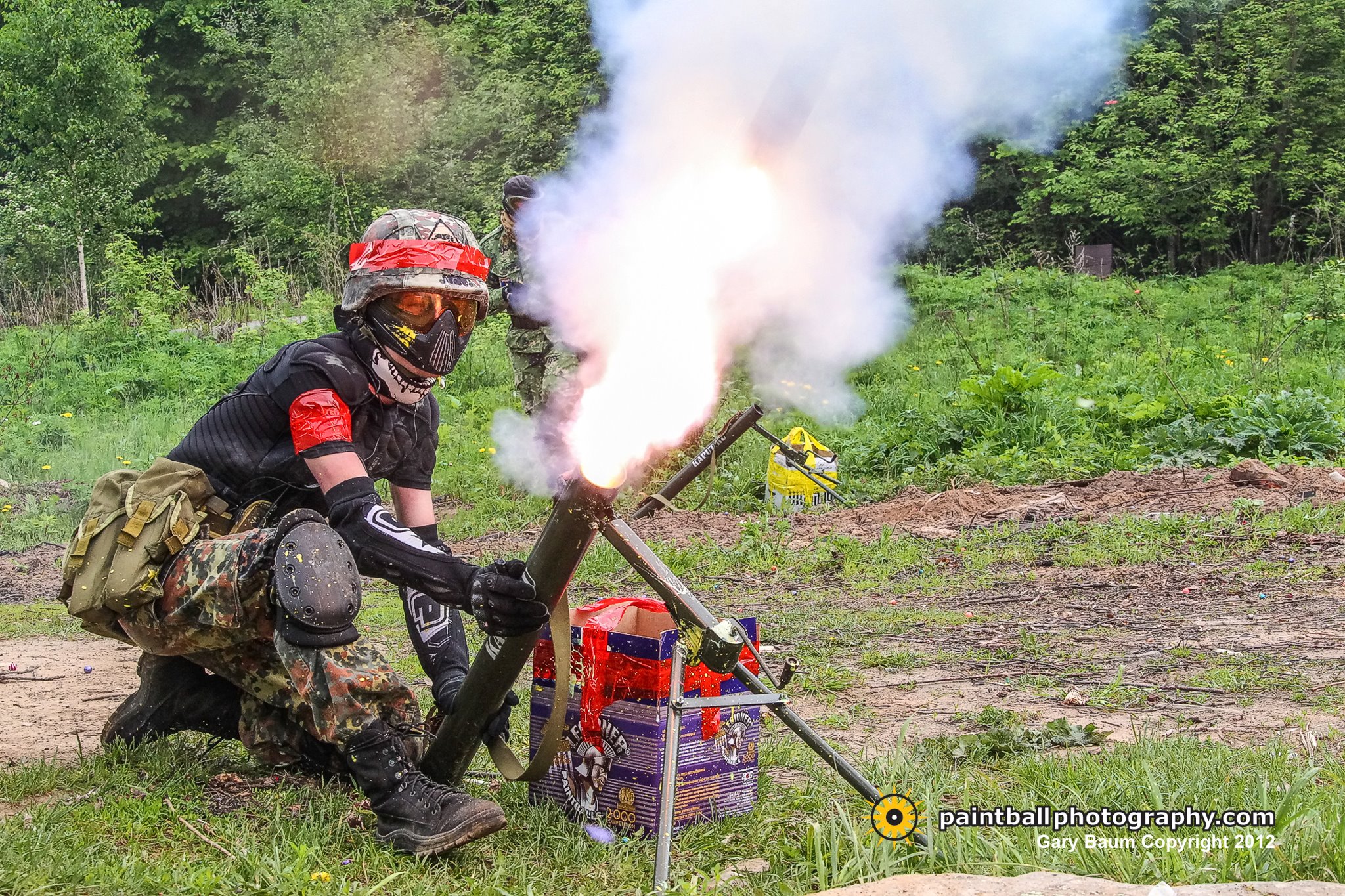 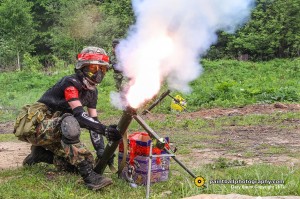 This year over 3000 paintballers from around the world gathered in Moscow, Russia for the largest single-day paintball event in the world. Nick Sobolev of Big Paintball Maneuvers takes pride in running Russia’s biggest scenario paintball games. These events are popular for employing pyrotechnics, state-of-the-art armo, and artillery (thanks to Eisern Kaput Panzerdivision). The game lasts one day and occupies several hundred acres of land with over 20 buildings and different landscape (forest, meadows and swamps).

This year’s theme was “Battle of Borodino.” The Battle of Borodino was the largest and bloodiest single-day action of the French invasion of Russia and all Napoleonic Wars, involving more than 250,000 troops and resulting in at least 70,000 casualties. This was a pivotal point in the campaign, as it was the last offensive action fought by Napoleon in Russia. By withdrawing, the Russian army preserved its combat strength, eventually allowing it to force Napoleon out of the country1.

Our field correspondent, David O’Dell, was at the event and provided us with a retelling of his experience in Russia.

[pullquote_right]The game literally starts with a series of explosions fired from artillery pieces…[/pullquote_right]I’m laying here in the waist tall grass some 30 Km north of Moscow. Everything is slightly wet from a light rain, which has made the humidity skyrocket, this Saturday May 19th, 2012. I am at Big Paintball Maneuvers’ annual HUGE scenario event in Russia.

This year’s game is based on the Battle between Russian Forces and the invading French Armies of Napoleon in 1812. I can’t understand anything any of the other players around me are saying but I know that there are HUNDREDS of players from the “French” Army massing in front of us for another mass group suicide charge into our lines. Dumping another 150 round pod into my Bob Long G6 and slapping my hopper shut, I wait. They’ll be coming…

Today started out at 6:00 a.m. waiting for a ride on the famous Moscow Metro. Each station in this underground maze is adorned with pieces of art, chandeliers, vaulted ceilings, and statues dedicated to events throughout their history. The train creates a blast of nice cool wind as it screeches to a halt in front of me, then the doors slide open. 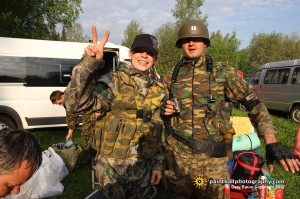 There’s a quick pack of people who exit the train, then a crowd of us board. We’re packed shoulder to shoulder with people commuting to work. Most wear earphones and stare at their iPhones and Blackberries (kind of like any subway here in America). Me, I just watch my gear bag. I’m going to need it today.

My name is O’Dell, and I play for Argent Force, a little known Scenario Team out of Southern California. I have traveled here with T-Devil of the famous Psyco Clown Posse. Somewhere in his gear bag is their trademark bicycle horn, I am sure of it. Every three minutes or so, the train stops at another station. Neither of us can actually read the writing, so we start using names of what the words “look” like. We pass Hobocar, Nascar, Tearbacker, and word with what looks like the international symbol for females in it. We pass the stop that leads to Red Square, which we had visited the day before; an area so rich in atmospheric history it actually becomes hard to describe. To me a lot of the buildings had a very Snow-White’s-Castle-at-Disneyland look to them.

Their Tomb of the Unknown is as sacred a site as is our own. I served with the 82nd Airborne for a few years in the late 80’s/early 90’s, so it was not lost on me how professional, or “STRAC” as we called it, their guards are. Like soldiers of the 3rd Infantry, or The Guards of Buckingham Palace, these soldiers were most obviously from among all of Russia’s finest. Lenin’s Grave and the famous Parade Grounds are just inside the walls, as is the Kremlin. I was speechless with how beautiful the entire area is. 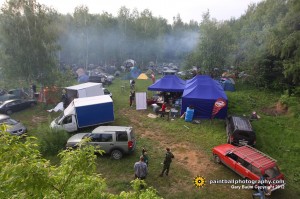 One stop past the “Red Square” stop, we exit the train, in order to catch a cab the rest of the way. We agree on $2,300 Rubles for the 30Km ride to the field. (About $74) The ride takes almost two hours because everyone in Moscow takes off for the weekend out into the beautiful countryside. Traffic can get bumper to bumper enough to rival the traffic congestion of any of the World’s major cities. Our only stop is to get a quick breakfast from McDonald’s. I had the Egg McDuffie meal with hash browns and an orange juice.

A few miles before the paintball field, I saw a miscellaneous paintball shot onto the exit signs, so I had a feeling I was getting close. When we get there, I was amazed at how big this event already is. I’ve played D-Day Oklahoma a few times, and was still taken back by how many players were there. I found out later that there were 3,066 players in attendance including players from Germany, England, and America. We link up with Gary Baum of Paintball Photography.com, who, with the help of the games Producer Nicoli, help us to bridge the language barrier and make registration completely problem free.

Once we were registered, we geared up, left our bags with one of the vendors, who did an outstanding job of keeping an eye on our gear (Thanks guys!), and went to fill air and crono to hit the field. We asked about the FPS for the game and were told Between 270 and 290 is okay, but if a player gets caught playing 320 or higher, it’s bye-bye. No questions asked. That works with me because my wife isn’t a huge fan of the welts that accompany our sport.

The game literally starts with a series of explosions fired from artillery pieces out on the field. First thing I am struck by is how beautiful the field setup is. Nice thick forest with plenty of decapitated buildings peppered through the center of the field. These buildings, or “cottages” as they were referred to, have a “cool” factor to them that kept me playing in that area for quite a while. In the center of the 450 acre playing field, is an open area with Armored Car Facades throughout what looks like a farm field. Play in this area was like playing Speedball for the most part. The Russian players play a very charge orientated form of paintball. Some of the players don’t even have paintball guns of their own, and are out on the field to keep everyone in a constant state of forward attack! The Opposite Team (Blue), or “French Army,” is also in a constant state of being thrown forward, which is how I found myself waist deep in the grass waiting for the charge…I don’t wait long. 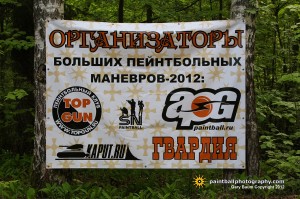 I can hear their “Leaders” pumping them up for the charge. They then throw smoke Grenades to mask the assault. Then there is a ROAR of yells as the body waves come. There’s no way to know who hit who or how many were hit, but we repel their attack (I spent three hoppers worth on that one). This was followed by a brief moment of relative quiet as the survivors on our side reload. Next thing I know it’s OUR leaders gearing us up for an assault charge of our own. You DO NOT need to speak the language to hear the age old, “We’ve got ‘em on the run boys, don’t lose this momentum!” speech. Then the ROAR is from our side this time! Group mentality takes over, and the next thing you know I too am screaming like the Russian teammates around me. Then magic time.

Hundreds of screaming Russians and I charge into the forests North of Moscow in an attempt to take the building being occupied just to the front of our positions. And this type of play goes on all day.

After the game, there’s an awards ceremony where they announce that the “French Army” had the points to declare victory. Neither I nor any of my new friends (Comrades?) from the “Russian Army” side seem to care, because such a good time was had by everyone there. We were even treated to a live performance by a Russian band that had a definite upbeat “punkish” sound to them. All the players I met after the game were ultra-friendly and ready to practice their limited English vocabulary out on me. I even met players who were veterans of the Russian military. I explained to them that I had served as an Airborne Infantryman myself. At that point we did what I wish soldiers from all around the world could do with one another – we took vodka shots and laughed about the good time we had all just had paintballing.

I want everyone to know that Russia is a beautiful country and their paintballers are some of the nicest and fun to play with players I’ve had the pleasure of being mowed down by in my 28 years of playing our sport. I am already looking forward to a second trip to the Motherland someday in the future for another chance to play what could become a new “Pilgrimage” game for scenario ball players worldwide. Big Paintball Maneuvers! Sling Paint Eternally My Brothers! 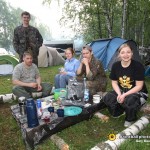 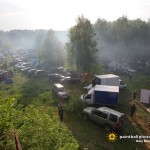 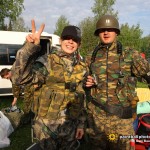 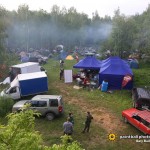 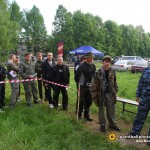 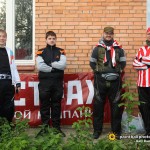 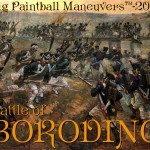 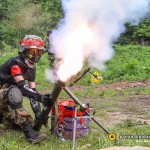 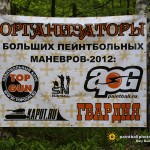 Our Official Media Partner, Gary Baum of PaintballPhotography.com, has provided us with some amazing photographic coverage of the event. To see the complete gallery, please visit: http://www.paintballphotography.com/index.php?option=com_jfusion&Itemid=167&g2_itemId=287897