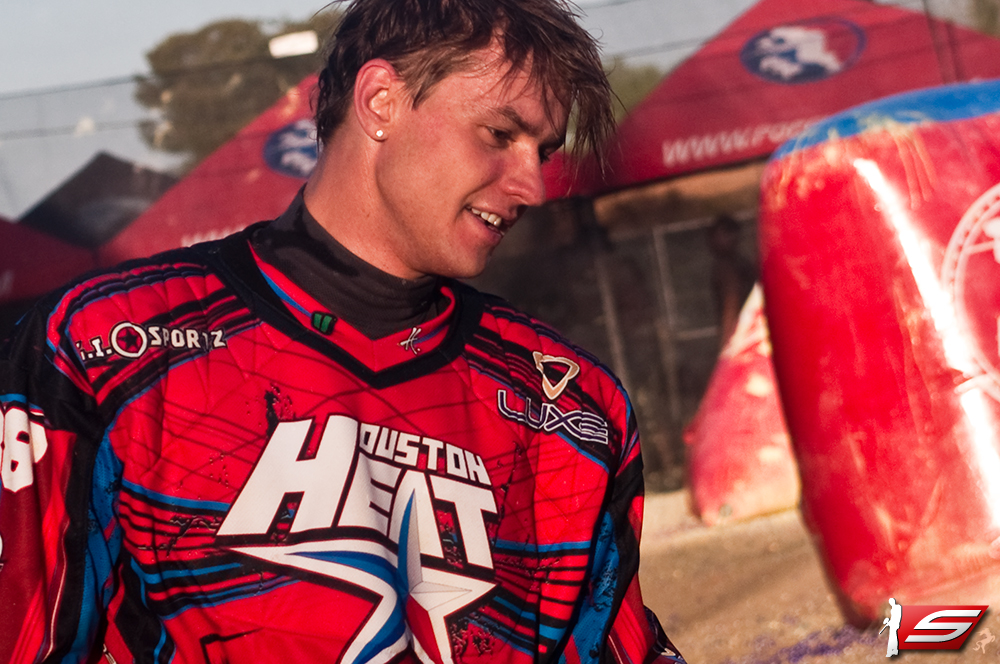 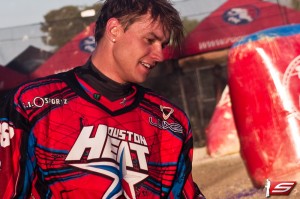 This Saturday we saw some of the most insane and crazy paintball play on the planet. Did anybody expect Tampa Bay Damage to be out of the event at this point, loosing to San Antonio X-Factor (5-4), Los Angeles Infamous (6-4); or for Omaha Vicious to make the cut, destroying Dynasty (6-1) and Seattle Thunder (6-2)? Even Chicago Aftershock found a rhythm and was competitive in their matches against the Los Angeles Ironmen – who look the most consistent of any time at the moment – and Los Angeles Infamous. Heck, we could do a full story on the consistently inconsistent play of Infamous and how they have battled through teams, the referees and a slew of other inconsistencies, but yet they have made it to the quarterfinals! The biggest question I have right now is what has happened to San Diego Dynasty? Through the ending of Galveston and into the Phoenix event they have not looked comfortable except in a few points.

Largest surprise of the day: Omaha Vicious. A lot of folks would say that Dynasty and Damage are the big surprises, but we like to focus on the teams that had positives. Vicious is by far the big story from Saturday. We gave you guys hell the last few days and man did you pick it up today. I was expecting to write an article about how allowing several players to play an NCPA event the weekend before a tournament may not be conducive to winning PSP events, but against Dynasty, they looked stellar. They looked AMAZING against Dynasty, Vicious’ points against Seattle Thunder weren’t so precise and they looked a little off kilter. If Vicious can play Sunday, the way they played Dynasty, playing every point with something to prove, playing their game, owning the real estate, we expect great things from them.

On the other side of the coin there is Chattanooga C.E.P. We keep waiting for the light to come on for C.E.P that to win paintball matches you have to a) stop getting shot out of your bunkers b) stop getting penalties. Honestly, it’s been another painful event from the Chattanooga boys and we can only hope that they can step it up by next event. Good luck guys, we’re all pulling for you – really. Honestly, you could see it in the Dynasty match that teams don’t feel they need to beat CEP, they just need to wait for CEP to beat themselves. It’s painful to watch, CEP has talented players, but they are just trying too hard to make something happen. No teams in paintball ever win every point. Tournament players aren’t cheaters, they just become so focused on winning that they become oblivious to the hits…as is the case with CEP, we suspect. They are just trying way too hard and are much better than the scoreboards reflect. Just go out and play paintball guys.

X -Factor’s points against Damage were tight, they have been playing very technical, very smart (minus some penalties by Archie Montemayor) paintball and have earned their spot for Sunday. Should they continue that, they have a great chance to win it all.

A lot of the hype for today was the grudge match between Legion and Heat. I’ll be honest, since the issue was decided with penalties, I feel like it is still in doubt and could on any given point go either way. Except for Legion, I’ve watched the Heat outclass, for lack of a better term, the teams they’ve beaten. They used experience and smart play to outwit teams. Look at Heat’s points against Thunder, after Bearham’s (Thunder’s snake player) amazing second point, they sent a guy up snake and then on a one second delay, sent a player dorito side. Every Thunder gun went snake side, D side player could push forever at that moment, their experience and smart play beat teams.

So here we have it, your Sunday finalists!

We are especially intrigued by the San Antonio X-Factor versus Los Angeles Infamous matchup as we think this could easily go either way. Both teams have had flashes of brilliance, but have also been down in the depths at others. It is my personal opinion that if Infamous can stay penalty free, and the play of Damien Ryan is consistent they will prevail.

For the entire event, I am (personally) sticking with the Los Angeles Ironmen. They have been impressive from the beginning of the season and it has been fabulous watching them so far. – Lawrence
I am Rooting for Vicious, I feel like if they can stay aggressive and play their game, they have it. Their points against Dynasty were a thing of beauty, if they play hungry they can’t be stopped. – David
Today Heat showed me that they have fight in them. They were down 0-3 against Red Legion and battled back for the win. Then Red Legion’s new additions stepping up to assist the veteran play, scary stuff. I’m torn between Heat and Red Legion. – Israel

Here at Social Paintball we want to give mad props to the PSP and PBA for putting on an amazing Webcast. We can’t wait to see the matches and to see who actually claims the PSP Phoenix Open title! Stay tuned here at SocialPaintbal.com as we conclude the second event of the season tomorrow.