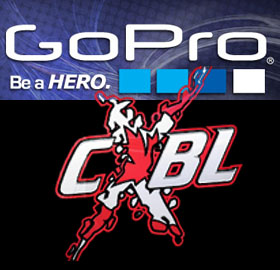 BuyPBL is pleased to announce the official partnering with GoPro® HD Cameras, and the sponsorship of the CXBL paintball league.  GoPro®  is a platinum sponsor alongside G.I. Sportz, SupAir, Sly and Empire.

It’s not an over-exaggeration to say that the GoPro®  has changed the world of both amateur and professional video making. GoPro®  produces arguably the most versatile cameras in the world, the famous HD HERO line of wearable and gear-mountable cameras and accessories will bring a new dimension to the already impressive lineup of Backline Media produced web series.

Robert Lee, CEO of PBL Action Sports said “We are pleased to have GoPro®  on board for the upcoming CXBL season.  We believe that our companies share the same vision, and together we will produce the most cutting edge paintball footage and league coverage. To quote Nicholas Woodman, the founder and CEO of GoPro®  “GoPro®  helps people capture and share lives’ most meaningful experiences with others—to celebrate them together. . .the sharing of our collective experiences makes our lives more fun…”

Eric Mayeu, Marketing Coordinator for GoPro®’s Canadian distributor (OGC) said “We were impressed by PBL when they approached us about a partnership. Their professionalism and sheer love of their sport fits perfectly into the GoPro® philosophy. We are excited to work with the CXBL, their events will showcase our products, and our products will showcase their events!”

The CXBL Elite games will be filmed using the adaptable GoPro®  Hero II cameras, elevating the existing coverage and providing viewers with an even better seat to Canada’s premier paintball sporting league.

GoPro®  cameras are available immediately for retail at the Montreal Flagship location of PBL Action Sports, in addition the cameras can be purchased from PBL’s e-commerce website, www.buypbl.com. Email: sales@buypbl.com for additional information.

GoPro®  is the world’s leading activity image capture company. GoPro®’s products are sold through leading specialty retailers in more than 50 countries and online. GoPro® ’s official website  is www.GoPro.com and they can also be found on Facebook at www.facebook.com/GoPro.

BuyPBL is one of Canada’s largest paintball stores located in major cities across Canada. BuyPBL is the exclusive Canadian distributor for renowned paintball brands such as G.I. Sportz Paintball Products, DXS Paintballs, VForce Goggle Systems and HK Army as well as a master distributor for popular brands such as Tippmann and  Valken.  PBL can be found online at www.buypbl.com, by phone 888.595.5993 or on Facebook at www.facebook.com/buypbl.