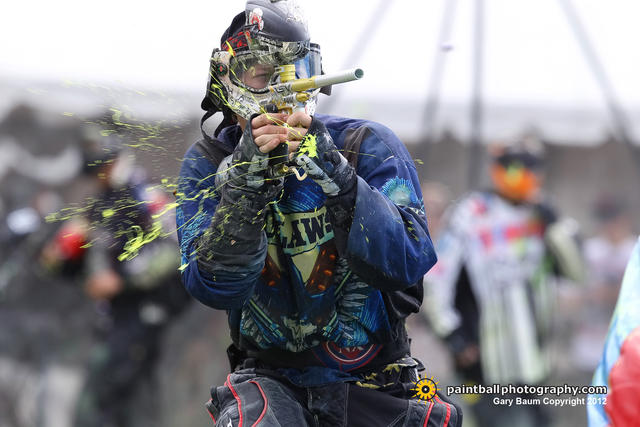 Social Paintball was up at the crack of dawn and was in attendance all day long covering the first day of competition during the 2012 NPPL Surf City USA Open. The weather started out gloomy, but as it got closer to noon, the sun started burning off the overcast. Division 4 Teams (8 5-man Race-to-4 Teams and 17 7-man Teams) and a total of 4 Pump Teams (Race-to-2) played on two of the three fields set up atop the sand of Huntington Beach.

Registration didn’t get busy until closer to 2 o’clock in the afternoon, so showing up early paid off for teams that had the opportunity to get to the fields on a Thursday. Even when it was at its busiest, however, the NPPL still managed to run smoothly. Teams had to check in to not only get their wristbands and ID cards, but to also get the NPPL’s Official ROF-fi chips to install into their markers. This chip helps prevent players from cheating and operates on a radio frequency. Each player’s marker is tracked and the signal is sent back to the main computer. If this computer receives a signal from someone’s marker that is shooting beyond the regulated 15 bps, an alarm will go off and tell exactly whose marker it is. Each chip has a unique number. This chip also helps keep track of how often you are shooting and the computer can send an email and inform them of what those numbers are.

Local and National Media
Media outlets outside the sport of paintball are in attendance this weekend such as Orange County Register (OC Register), the Daily News, LA Times, and even ABC all have plans to be at the Surf City USA Open at some point. The NPPL also reached out to other stations such as CBS, NBC, and KT LA and sent out press releases to them about this event.

Vendor Area
Some of the vendors not mentioned from yesterday’s report are Giant Sportz, HK Army, BlackStar Paintball, Unity Paintball, KM Straps, Hundredth Monkey, US Army, PaintballTickets.com, PBLyfe.com, llpaintball.com, alienpb.com, Avid Extreme Sports, Azodin Paintball, Aflac Insurance, and even a business selling quality bed sheets were in attendance yesterday. Also seen in the vendor area today was Jeramy Salm, former professional player for Avalanche. He was helping out at the TradeMyGun.com trailer this year. The traffic going through wasn’t too bad considering it was a Thursday, but tomorrow should bring even more foot traffic with the start of the Professional, D1, D2, and D3 Competitions.

See the Thursday Schedule and Scores at this Link: