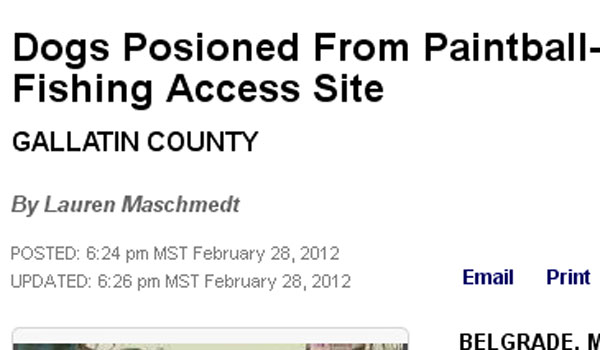 Sasha Lindberg and her family like to come to the Cameron Bridge fishing access site just south of Belgrade. But last week, something was different.

“There were a big group of boys, probably 12 to 17” she said, adding they were “all dressed in camo with paint guns, shooting paint guns just right in this area.”

A group was playing paintball. Lindberg didn’t think too much of it at first, even talking to them in passing.

But her dogs got into the paintballs, which littered the ground. Lindberg’s dogs ended up in the vet hospital. They were throwing up, injected with morphine and had stomachs pumped. Lindberg’s daughters Katy and Bella were with her when the dogs ate the paintballs, and when they became deathly ill.