Again, a lot of this is my opinion and not that of any website and or any field or team I’m affiliated with…I feel like I’ve said that before…

The APPA made some big changes for 2012, so I have contact and asked Chris Raehl for his feedback. He has been gracious enough to review this because he really does care, and I never doubted that. I did have some mistakes, which he pointed out, and I thank him for his openness and honesty.

“Unlike 2011 and prior seasons, players may be promoted to any division at any time. There is no longer a cap on being promoted to D2 or higher if you did not play PSP events.”  This is quoted directly from the APPA website (1).   I don’t understand the logic behind this move but it’s definitely a change. 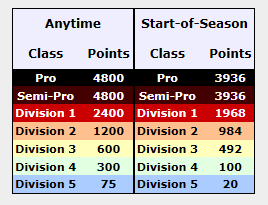 Here is the new point divisional table for 2012. Obviously some of the divisional point levels changed for this season; mainly in the lower divisions. The event scoring has also changed with some new multipliers being added.

The equation for the APPA Event Score has become: 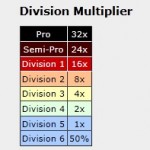 The division multiplier is defined by this table. I don’t think it has changed, but maybe D6 was added. I agree that different divisions should count for more points, I feel like anyone would. 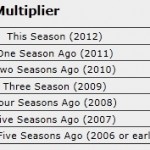 The season multiplier is still the same and it is just common sense that, as time passes, the events should count for less. This accounts for when people take time off from the sport for life (school, work, family etc.) and then return at some point. You shouldn’t expect their play level to be the same.

The players fielded multiplier is new for 2012, but I think it’s a great idea. In theory, it’s trying to allow 3 man points to be calculated in with 5 man points. The multiplier will be based on the number of players for the event, that’s another great change and it’s based on the max players possible. 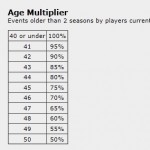 The age multiplier is also new for 2012. Again, I agree with the theory that as you get older your past points should count less. But note that this only applies to events two seasons old and players over 40. This is an excellent upgrade and a move in right direction. But it’s over simplistic, in my opinion. The age when you received the points minus your current age multiplied buy some coefficient makes more sense to me. This would allow for aging across the board and is definitely a positive concept by the APPA.

I think the changes are, all in all, a positive measure. Maybe the number of teams multiplier does act as a strength of conference or league strength, or that’s what at least I feel like it intends too. All in all, I think the APPA is heading in the right direction like anything –  it is evolving and getting better. All the changes are very positive and moving in the right direction. 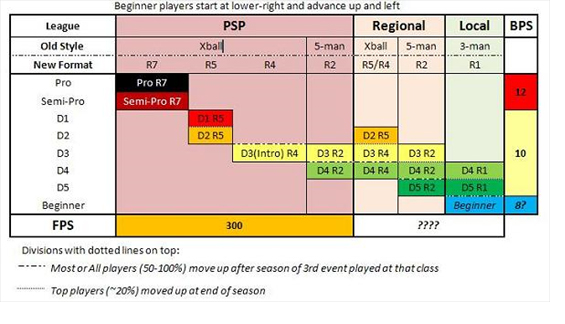 This is one complaint I’ve heard repeatedly with the APPA system. Maybe these changes fix it? Who knows. The issue is that the system should be tiered with different series counting different points, local counting less then regional counting less then national. This graph from a 2009 APPA press release says to me that they agree but haven’t gotten there yet. Maybe some of these changes will help to get them there?

I applaud the APPA for the changes and I hope the changes achieve the desired results. I think the intent behind all of them is awesome and the changes are absolutely a move in the right direction.