The Many Faces of “That Guy” 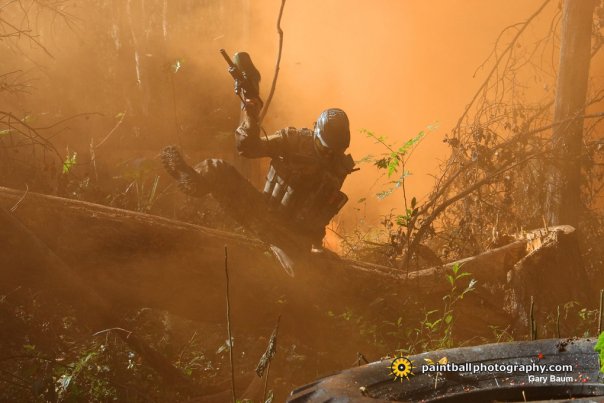 Do any of you out there have that one guy at your field; maybe he is on your team or maybe a player or ref? It’s that one guy that can’t seem to switch between rec mode and tournament mode? Who, at every given chance lights up everyone he sees, be it new player, renter, or old timer/vet? I’ve run across this person a few in my years of playing, and one thing always irks me. Why would you ever think it was “cool” to stitch a player up, head to toe, when one shot will do? If I happen to catch some in a vulnerable position I try to make it as painless as I can for them. Now, I am not saying I am a perfect baller. I will admit to being “That Guy” at times, but I think what sets apart a sportsman and “That Guy” is the afterthought. How often do you seek the person out that you light up? How often do you realize the mistake you made, and try and rectify it?

One of the most common “That Guy” moves that I see at field is when the experienced player takes more shots than needed to shoot out the new player. Most people I play with would put 1, maybe 2 shots into the persons pack or gun, depending on how exposed they are, trying to be as sportsman like as they can. “That Guy” on the other hand has a tendency to throw as much paint into the person as they can. Why? Who knows. Maybe they were the last kid picked in gym class and are now taking it out on others. Maybe they just don’t know how to turn off the “tournament switch” when the time calls for it.

What really pisses me off about “That Guy” is when he blames everyone else and his equipment for what he does. It’s not like your brand new NT11, Luxe or Ego is making you shoot like that. It’s your choice. So, the question to be asked here is, how do you deal with “That Guy”? I have seen many approaches to dealing with this type of person. But first, let’s start with how to define “That Guy”, as I feel there are many types of “That Guys” that can ruin a day of play for everyone involved.

Behold the Over Zealous Fanboy. Here is someone we are all familiar with at the field. “That Guy” that shows up decked out head to toe in the latest Dye or PE gear (or some other brands, just giving examples). This person usually has an attitude of “if your gear isn’t like mine, you are not worth my time”. Definitely not the kind of person we want to play with, but they are out there. I tend to inform these people that it doesn’t matter how you look, but how you play. The typical response is? “Maybe if you looked better you wouldn’t need to make excuses like that.” I find it better to just out play “That Guy” on the field and show them that true style is a combination of looking good and playing good.

The Over Shooter. This is one person no one will ever admit to being, but everyone voices their distaste for. Have I over shot someone before? Yes, I have but I have always gone up to the person afterwords and apologized and tried to make the situation right. We all make mistakes, right? The difference here is “That Guy” will never own up to what he did, and will just make excuses. Such as “I never saw his hand or gun up”, or “he never called himself out”. Well, how can the person have time to call themselves out when you are putting that much paint into them? There are 2 different types of Over Shooters in my book. You have the one who just puts as much paint into everything he sees move and there is also that guy who, as mentioned above, puts more into a person then is needed to get them out. I personally find the second one to be the most frustrating, as you can easily deal with the first guy. The second guy is usually the first to over shoot and the first to bitch about being over shot. Not that fun to play with if you ask me.

The Wanna Be Tournament Player. This guy is similar to the Over Zealous Fanboy, but they tend to have some skill. Unlike your typical skilled player, who tries to advance up the field as much as they can to advance the game, this person likes to hang back. Typically I see this version of “That Guy” with the latest and greatest gun, hanging back, and letting all the seemingly fearless players exchange blows on the field. Then, as the game is winding down, and all that’s left on the field are the more timid and sometimes newer players, this person will advance. In typical “That Guy” fashion, they usually shoot as fast as they can, putting as much paint in the air as they can, and indiscriminately shoot everything that moves, all while crouched down in the most “agg” stance they can be in. This person is also one I see that gets all butt hurt when they are run through, or taught a lesson by more experienced players; yet they go and brag to their buddies about how they wiped out the whole field with a run through at the end.

The Super Special Milsim Ranger Black Ops Sniper Guy. This guy is more laugh worthy than anything else, but can be a nuisance on the field. There is no real way to deal with them that I see, you just have to put up with them, and laugh when they look like fools. Before I continue, please make note that I am not bashing woods ball players or Milsim players. This is directed solely at just that one special kind of person. “That Guy” that shows up with a 21 inch “sniper” barrel, all Mil Spec gear, including a real ballistic helmet; and to top it off, they are wearing active military rank and unit patches. I have even seen someone show up wearing both combat and unit identifier Special Forces patches, and this same person spent the morning bragging about his time with SF while over in some “undisclosed” location. When confronted, “That Guy” removed the patches, and stopped making up stories. But, all in all, this player is usually good for a few laughs. How to spot this person on the field, you ask? They may be low crawling between buildings, or using hand and arm signals they picked up from a SWAT movie, or calling out code words from a Call of Duty game. Only time and experience will educate these players, but until then, just enjoy the laughs you get when you seem them low crawl through a pile of old paint hidden by fallen leaves.

How to do we deal with “That Guy”, even if he is one of our group? There are many ways of dealing with this person. You can confront them, try and inform them of their ways, and maybe shed some light on their actions. Then there is the more common approach, shoot them up on the field. Is this the way to go? No, not really as it can cause more issues than it solves. It can be quite satisfying to wreck “That Guy” in the next game after you witness him run through a bunch of renters like he’s Ollie Lang. Then there is also the solution that I see most often off the field, ignore them and the issue. I hate it when I see this. People will complain behind “That Guys” back, bitch and moan about all the things they did, yet they don’t have the stones to go confront the person, on or off the field. Do you have the stones to put “That Guy” in his place? I hope so.

All in all, “That Guy” will always be amongst us at the field and there really is only so much we can do. At the same time, we have all been “That Guy” on and off the field at one point or another and we have all been put in our place, so we know how it feels. I would love to hear your input, your stories, and your experience in being or dealing with, “That Guy” – only if you have the balls to tell us. 😉