An Intro to Paul Forcier 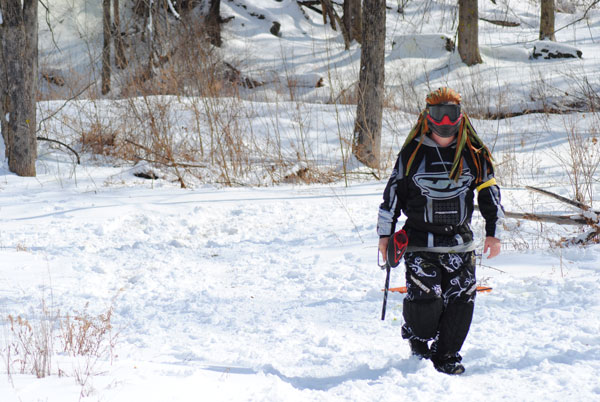 My love for paintball started like so many other players. There was this fascination with running around with friends and family in the woods shooting at each other. Perhaps this is an early, innocent thing from my childhood or just an inert human instinct to “hunt” down something. Whatever it is this love has grown well beyond anything I would have imagined it would have.

I started playing almost twelve years ago with some friends in a small wooded lot behind their house. A Spyder clone was my weapon of choice, not because I thought it was a awesome shooter but because I did not really know what was available at the time. With a full tank of CO2, my clone and a really cheap mask I headed out into the tree and thick brush wearing jeans and a t-shirt. Little did I know I would not be a natural at the game. With each passing game played I was eliminated, with my first shot ever being a direct hit in the throat. Ouch is right! Not to be deterred and knowing my skill level was not much I decided to become cannon fodder so my fellow team mates would at least know where our opponents are. This worked well and when all was said and done it did not matter to me that I had not shot anyone out, until the end of the day when we just shot at each other at close range for fun. This was when I first felt that rush, that pure adrenaline and fell in love.

I played in the woods with anyone who would play as often as I could. Not long after I started to play my son joined in, at times bringing along some friends who I would end up paying for. Four years were spent playing like this until some friends I met on the SpecOps game locator introduced me to a team I was proud to be a part of, the Band of Brothers. In this team I grew, rising through the ranks to be a co-captain. We gained notoriety and respect in the community and received the attention of many sponsors, some of which we still have to this day under the new team name of Ronin Brotherhood. Through these teams, and an injury, I started writing for many paintball publications. As my time away from the field got longer my writing became more and more recognized in the industry. I have interviewed everyone from Ollie Lang all the way down to the local players just starting a team. No one is bigger than the next guy in this sport, we are all part of the same community and need to do what we can to make this sport grow.

Through the tough times writing has kept me involved in the sport I love. It has helped me mentally cope with sometimes not having the funding to actually get out there and play. To me, it does not matter if I am shooting a marker or a camera. It is just as much fun to cover an event hidden inside of a brightly colored vest with camera in hand. I think of this sport often, unfortunately I live in a part of the country where paintball is not played all year long. In the winter we get one chance to play in the neighboring state, and we take that chance. Out into the snow we travel just to open up each season. Perhaps one day we will run into each other, I can only dream.

See you on the fields. Be lucky if I have a camera in my hand and not a marker. 🙂