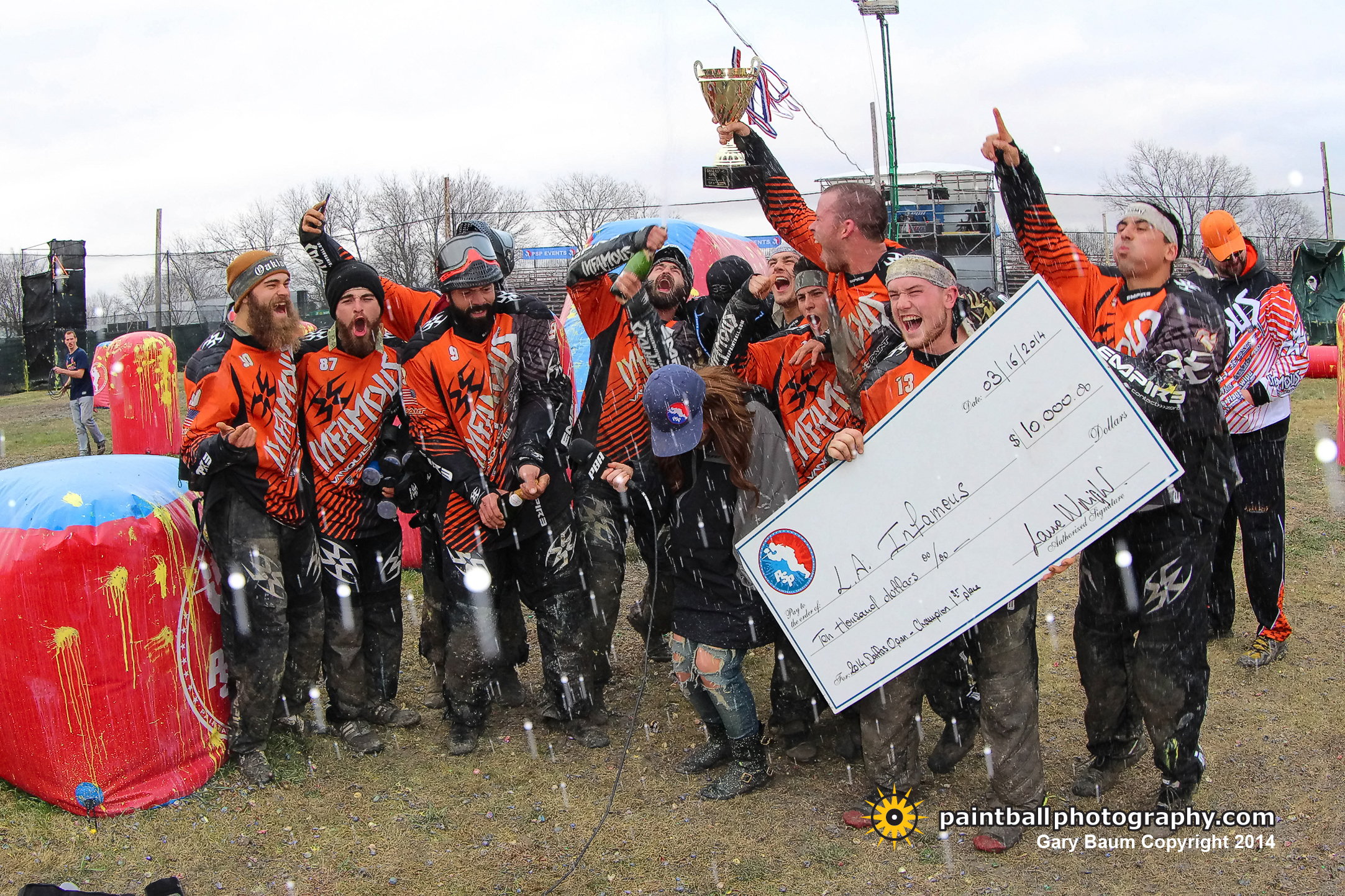 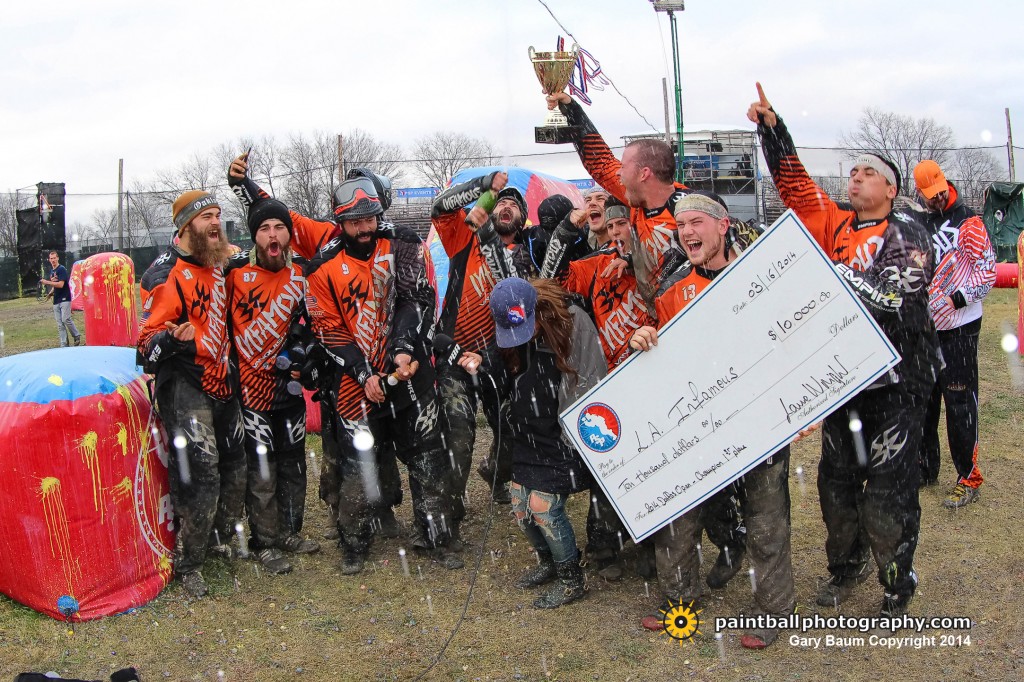 After fighting against relegation an unforgettable four times last season, backroom talk lingered about how Los Angeles Infamous would perform this year. However with a top podium finish, old news is tossed in hindsight and they’re back to pack the heat. Kick-starting the season off with the gold, Infamous bulldoze through Dallas and finally declare their ground – they’re not going anywhere.

I put Damian Ryan and Brad McCurley on the spot for them to lay it out. This is full exposure of Infamous in the pits at Dallas and what’s to follow the rest of this season.

Looks like you boys are making a come back with a fully loaded roster. Both Zacks are back along with the Bornstein brothers, how’s the team getting along on and off the field?

Damian: This offseason was a particularly wild one. There were a lot of BIG roster moves and some serious cash being thrown around. With Infamous being one of the few teams being fully funded from a paintball industry company (such as XSV and Ironmen) it has some serious advantages. One downside some may argue about is the approach to our roster. Contrary to some approaches of offering cash or going after a “Gun for Hire,” our team is a little more built and focused on family and chemistry. We didn’t want to pick up a player that wouldn’t fit into our program. Ultimately at the end of the day, teams that operate as a unit and family will prevail. Personally, I prefer it that way. I don’t want to be in battle next to someone whose ONLY purpose is to get a paycheck. That being said, after the disappointing season last year, we had to make some roster additions and change our level of preparation. Zack Patient was out all last year with a blown knee, Zack Wake was busy getting cut from a team that doesn’t cut anyone, Jason Bornstein was on pilgrimage in the holy land and Corey was playing with Impact for part of the season, but from what I know just wasn’t a good fit. We knew the Zacks were both onboard for the long haul and we have been talking to the Bornsteins for a short time before coming to the conclusion that they would be a great fit. As most of you know and to those who don’t, will probably find out at some point we aren’t the most “normal” team and are all a little crazy in our own way. I will say that I personally feel the team as a whole, fits perfectly together. We are one giant dysfunctional family that hates each other but hates everyone else more so we have no option but to stick together…joking of course.

Brad: Haha, I love the INFAMOUS family. It’s good to have the Zacks back. They give us some pace up front that adds to our versatility. Getting these two back to produce makes it much harder to predict what our plan of attack is. The Bornstein brothers take our already-high-level of confidence and intensity to a whole other level. Unlike last year, we have a lot of depth to our roster this year and that alone will make us much more dangerous. As far as off the field goes, well, we’re pretty easy to get along with, haha. We love to do what we do and that translates on and off the field.

Truth be told there’s no offseason. How does one gain the agility and confidence like that of Chuck Norris before the first event?

Damian: I don’t think I would compare myself to Chuck Norris as we all know he is on another level. I do like to pride myself on being athletic, flexible and agile. I have played sports my entire life (mainly soccer) growing up and like to feel that being on a different level than the normal to professional paintball player is helping to grow our sport to another level. Conditioning, training, drills, weight lifting, being active, eating healthy and having a clear mind all help one become like a ninja. I do personally feel that last few years a lot of professional players have stepped it up a notch when it comes to the “athletic” side of paintball, which has helped separate the professional ranks even more from the lower divisional teams.

Brad: Physically and mentally I feel more in tune and focused than ever. I have very few distractions in my life right now so it’s pretty much been eat, sleep, paintball. We worked very hard this offseason training to prove our worth at this level. There have been a lot of people doubting our place among the best after our weak performance last year. This being said, physically I’m stronger, very healthy, and mentally focused coming into this season.

It was a battle against X-Factor in the Preliminary round (Score 5-7) What were the team’s weaknesses during that game?

Damian: Going into our 4th preliminary game against X-Factor, there was a lot riding on it. They had just beaten Damage, which meant that both teams were onto the top 4 Semi’s on Sunday so all that was at stake was seeding. This was a huge change for us compared to last year when it seemed like every match was a battle to stay out of relegation. The winner would face Vicious, loser would face Dynasty. Of course we all remembered what happened this exact stage last year against Dynasty. Blowing a 4-2 lead in a 1:30 and missing out on the finals, so there was a lot riding on this game. I think our main problem was penalties. This was quite possibly the WORST field layout to get a penalty on that I have ever played. I don’t want to say we came in with a changed mindset because we were already onto the GOOD side of Sunday, but I do think we all felt a bit relieved knowing we made top 4 no matter what the outcome of this game.

Brad: We came out trading points back and forth. It was 3-2 in our favor when we got a major. Drewbie ended up being put in the box to serve it while our penalty kill line came on and handled business 4 vs 5 forcing them to concede two straight points. However the momentum quickly swung in their favor when we got a second major of the match. This time I was forced to serve the penalty and watch X-Factor ring up 3 quick points. Our last chance to take the wind out of their sails came in a long 3 vs 3 in the 5-5 point, which we dropped the ball on. We lost 5-7 in a hard fought match in which we learned the hard way with how penalties kill you on this field. In the long run, this game may have won us the tournament, as we were able to look back on the little mistakes that were made; the things that win or lose you games on Sunday.

Taking the loss against Dynasty this time last year at Dallas was heartbreaking for the team. What were your thoughts in the pits when you were up against Dynasty again this year?

Damian: I wouldn’t say losing to Dynasty last year would be the correct term. BLOWING IT would be much more fitting. Between penalties and me shooting our own guys off the break (NOT DREW THOUGH!) we managed to blow a 4-2 lead in less than 2 minutes. Everyone knows as well as I do, that the game is not over until the fat lady sings…and maybe not even then. Being up on Dynasty was a great feeling, but we know that we had to finish and close out the game. With it being tied with around 15 seconds left in regulation I think we had OT on our minds. Never take anything for granted, we almost had the exact same thing happen as the year before, but thankfully Oliver is still full of frog skins and monkey jerky from his trip to South America and barely missed the hang by .1 of a second forcing an OT point that we KNEW we were not going to lose.

Brad: Last year’s match at Dallas set the whole tone for the rest of our season. We were winning by 2 with a couple minutes left and ended up blowing it allowing Dynasty to go on and win the tournament. Following that we would go on to play in (and win thank god) 4 relegation matches. This being said, we knew we couldn’t afford to lose to these guys this year, in the same semi final stage. The match itself was very tense. It went back and forth to the point where it was 3-3 with 15 seconds left. The next point was chaos and my heart dropped in the pits as I watched Oliver grab the flag and lunge into the start box with time barely expiring in our favor. We just about lost in the exact same stupid dramatic fashion as last year. Because of that, we came out with second chance, overtime, and we weren’t going to let it slip though our fingers again.

Dallas Finals match with Vicious (7-3), what were your strengths to win?

Damian: Going into the finals versus Vicious, not a single one of us had any doubt in our mind that we weren’t going home Champions. We faced every challenge head-on over the weekend and were going home Champs. That and being the battle of Empire sponsored teams and the “friendly” feud between Infamous and Vicious there was no way we were going to lose bragging rights. We played well as a team this event with everything coming together in the finals match. Capitalizing on penalties, shooting people off the break, communication, and working together as a team were major things we wanted to focus on this event and for the season. I feel we did very well in the championship.

Brad: Going in, we knew this was our tournament to win. Everyone was clicking and we were getting contribution from both lines. Vibes were good and I could see it in all of our eyes that we all knew it was ours. We knew that Vicious was going to attack us aggressively on this field and that if we just play our game and execute, they couldn’t beat us. We stuck to our game plans, hit our shots like we did all weekend, and made them play our game. We made them try to adjust to us – they just couldn’t stop us.