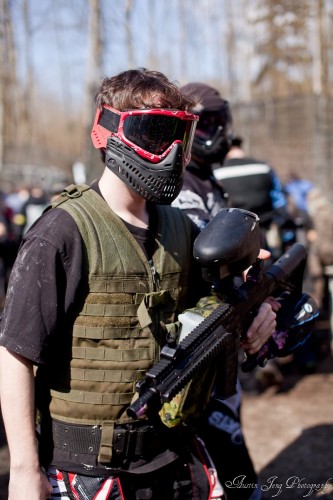 One big thing as a parent, regardless of the activity, is understanding the language your child is speaking. Here is a paintball dictionary to help you speak the language of paintball with definitions for various paintball terms. 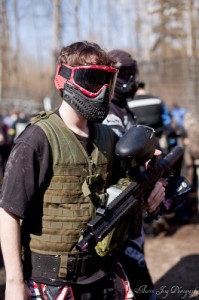 Marker -n. Accepted paintball terminology to replace or be used in place of the word “gun.”

Anti-fog Spray -n. A spray designed for preventing the lenses of the paintball mask from fogging.

ASA – Acronym for Air Source Adapter. The part of the gun where the tank screws into, to pressurize the marker.

Auto-Trigger – A feature on some pump guns where the user can hold down the trigger while pumping the gun allowing multiple rounds to be shot in a short amount of time.

Barrel (Paintgun component) – The tube from which the paintball is discharged when the marker is shot. Paintball barrels are made from aluminum alloys, brass, stainless steel, and carbon fiber. The major characteristics of a barrel are its interior diameter, length, and effective length.

Barrel Plug (Safety equipment) -n. a plug made out of plastic or metal designed to fit into the front end of a paintball marker barrel. This prevents paintballs from being shot out of the gun when in use, however if multiple shots are fired, the barrel plug may be shot out.

Barrel, Ported (Paintgun component) – A ported barrel has holes (ports) drilled through its walls for part of its length. Porting serves to quiet the paintgun by venting gas to the sides of the barrel, reducing the explosiveness (and noisiness)of the exhaust from the muzzle. Porting also reduces the effective length of the barrel.

Barrel Tap  – a way of eliminating an opposing player by tapping their bunker with their barrel.

Blind firing – To blindly shoot over the tops or sides of a bunker. Commonly a mistake made by newer players.

Bonus Balling -v. the act of shooting someone after they are already marked

Bounce  – When a paintball hits, but does not break.

Break -v. The paintball splatters inside the barrel on it’s way out due to friction, weakness of the ball, or outside weather conditions.

Bunker -n. any object used as a barrier between paintball players to be used as cover or for a protected firing position.

Bunker -v. To rush around the sides or over another players bunker and fire upon them at close range. See image 3.

Carbon Dioxide (Propellant gas) – A colorless, odorless gas used as a propellant. Carbon Dioxide (CO2), occurs in nature as a gas. In paintball applications liquid CO2 is used to partially fill the player’s tank. Some of the liquid boils off to become a gas and that gas is used to power the gun. Each shot fired removes some CO2 gas from the tank and that is replaced by gas from the liquid CO2 in the tank.

Chopping -v. Where the paintball doesn’t feed fast enough down the feed and the bolt goes forward and slices the ball in half.

Chronograph (Field equipment) -n. This is a device that uses radar to measure the speed of a paintball as it is fired from the marker.

Gogged -v. Paintball term for when someone is shot in the goggles or eliminated from a head shot.

High Pressure Air (HPA) Propellant gas – Quite simply, this is compressed air, the same stuff we breathe. In paintball applications it is compressed to high pressures (1800, 3000, and 4500 psi are the standards), in tanks and the output pressure is limited by a regulator. HPA and Nitrogen may both be used in the same containers and so both terms are often used interchangeably when discussing high pressure systems.

Hopper (Paintgun component) – A plastic bottle which connects to the feeder of a paintgun (often via an elbow). Paintballs are placed into the bottle where they are fed via gravity through a hole in the bottom.

Lit up (slang) – Term used for overshooting, or being shot up excessively.

Mask (equipment)-n. The absolutely most important piece of paintball equipment. Usually made out of plastic, rubber or foam, with the lenses made out of plastic. Factory capable of withstanding hits of objects at 300+ fps (feet per second) but not advised to be hit by anything over that.

Paint Check – Term when a player wants an opposing player to be examined by the ref to see if he has been successfully tagged or eliminated.

Pump Guns – Classification of paintball gun where an entire action of moving the bolt back, having a paintball drop into the breach, and bringing the bolt forward must manually be completed before firing.

Remote (Paintgun/propellant system component) – A long hose which allows the player to separate the propellant tank from the paintgun so that it can be carried elsewhere on the player’s person. Typically a long braided steel or coiled hose is used to connect the gun to a tank carried on the player’s back in a harness.

Semi-automatic – A class of paintgun. Members of this gun class fire one paintball for each intentional pull of the trigger.

Speedball – Essentially a game played on a smaller field with a shorter time limit than a woodsball game. A speedball game may last 10-15 minutes verses the 30-45 minutes for a woodsball game. Variants include capture the flag (CTF), center flag (CF), and total elimination. A speedball field is normally symmetrical, with level topography for fairness.

Tank (Propellant system component) – The tank (or bottle) holds the propellant used to fire the paintball from the marker. Tanks may hold Carbon Dioxide, Nitrogen, or HPA. All tanks have maximum pressure ratings, typically measured in PSI. Tanks come in a variety of sizes. CO2 tanks are sized based on the maximum volume of liquid CO2 they are intended to carry. HPA tanks are sized by the total volume of the tank. CO2 tanks vary in size from 12 gram powerlets up to 40oz “bombs”. HPA tanks are available in 53ci, 68ci, and 114ci sizes.
All tanks require periodic hydro testing.