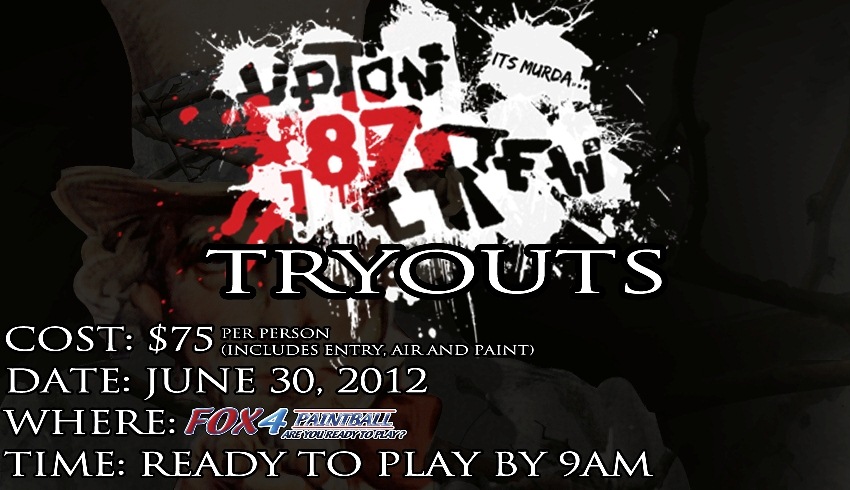 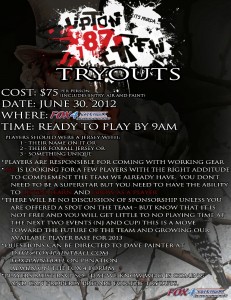 Professional paintball team Upton 187 cRew is holding tryouts on June 30th, 2012 at Fox 4 Paintball. This is a great opportunity to join a solid club with a strong foundation for success.

I asked Team owner, Dave Painter, why the need for tryouts. He sent us the following statement regarding the tryouts.

We’ve had a few players have to make the tough choice between their regular lives and their paintball lives. As we all know, those two don’t always mix well and in this case they have chosen to focus on their regular lives with the major focus of family and jobs. It’s always possible that they’ll come back to their paintball family next season but for now we are in need of a few certified killers to finish out the year.

Our players are currently being worked too hard. We played Texas with 8 players and Phoenix with 7 players. If you take out the two players in question, the percentage of points played by any one player on our squad is between 99% and 44% – averaging 67% playing time. This is a full 7 points higher than the next closest team and roughly 12 points higher than the majority of the teams (after throwing out their two lowest players too). This really points to one thing – we’re under staffed and it is potentially affecting their game and the team’s results. We need to be able to spread the workload out a bit more and allow our players to get a bit more rest during matches.

Being a home grown team we decided to hold an open tryout at our home field, Fox 4 Paintball in Upton, MA. Our goal is to find a few players who might be able to relieve a little of the playing time pressure now, but more importantly, grow into the killers we need for the 2013 season and beyond.

To RSVP please email Dave@fox4paintball.com and be sure to provide your full name, date of birth, and APPA number.