Getting To Know: US Army All-Stars Paintball Team 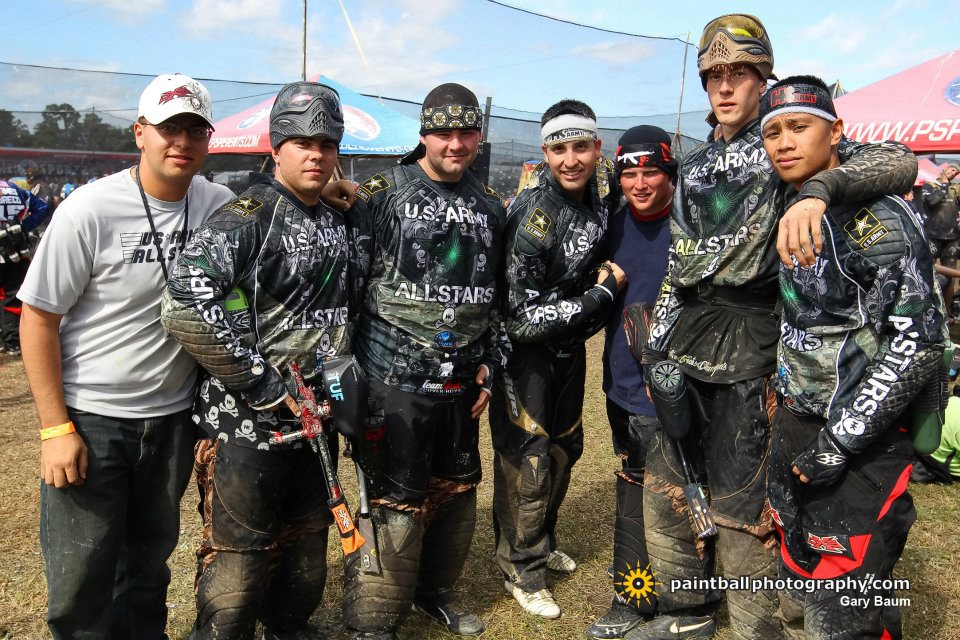 It is my great privilege to present to you the US Army All-Stars. I have had the honor to speak with some of their players, to learn their history, and to all call them friends. Not only are they out there protecting our freedom but also playing paintball in all their free time. Some of you at PSP World Cup might have seen them hanging around playing, just having a great time.

The history of the team, like any team, changes over time though I think this team in particular changes more than any other. Other tournament teams have core members, while the players here will only get to play with this team for a maximum of two years before they have to go to their next duty station. It is very difficult.

This program really started back in 2007 with team Anti Heros, then 2ID 2008 and finally 2ID 2009. In the year of 2010 we wanted to be sure our name represented the Army so we came up “US Army All Stars.” We’ve defended the 1st place title in every tournament here in South Korea for 2 years running against opposing teams. We don’t want to give that spot up. I think a lot of our motivation comes from the idea that we want to represent the Army. We don’t want some random team name up in that number one spot. We want to send a message saying “We’re a part of the Army and we’re proud to represent that.” The past teams started this and the program just continues to grow.

If you talk to people around your town, few play tournament paintball, and being a soldier in Korea, it is even more limited. It seems like we only get a year or so to grow together before someone or almost everyone has to leave. The team is in an almost constant construction period. With limited people, this means limited practice experience. We don’t have the opportunity to play higher level divisional teams that are better than us. We play each other or some of the few that do come out, so a lot of 5 vs. 5, 2 vs. 2 or 1 vs. 1 happens in practice. We do some of the more classic drills too, like one ball checks and running and gunning. We also get the opportunity to teach paintball as well. Tournament paintball is still relatively new to Korea, but there are people that are willing to learn. About twice a month, a club of Korean paintballers come up to our field and we teach them basic fundamental skills for tournament paintball. Even though there is a bit of a language barrier we have a great time and we always look forward to seeing our friends again.

A lot of people have asked if this is all we do in the Army, and the answer is unfortunately no. For this year’s roster, the jobs that we, as Soldiers, hold are Mechanics, Infantrymen, Signal Operator, Military Intelligence, Artillery, and even one Army Drummer. We have over month long field exercises, jobs that have hours of “when the mission is started” to “when the mission is complete”, 24 hour CQ shifts (that after not sleeping we still show up for practice), people that make day trips from other bases to make practice, family life, and some of us are even full time college students on top of all this. With this busy schedule, we can’t help but graciously thank people like Sam Kim of Seventh Element paintball products and owner of our home field (Camp Casey Paintball), and Command Sgt. Major Abbott of IMCOM Korea and now Army Morale Welfare and Recreation. We also want to say thanks to Team Beat Cover Boys for creating some of our logos, the boys at HK Army, and all the great people that we’ve met through paintball, especially you guys at Social Paintball…HOOAH!!!