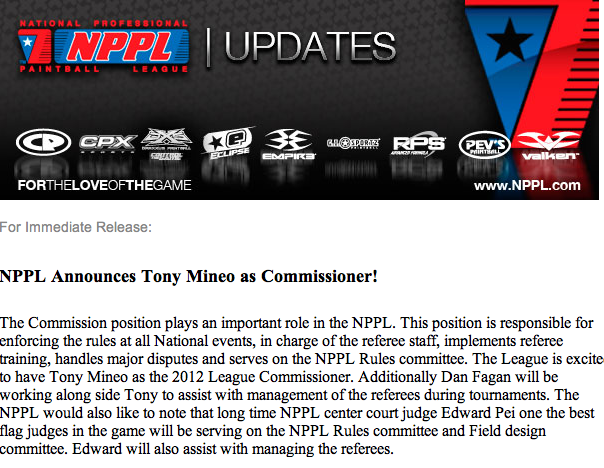 The Commission position plays an important role in the NPPL. This position is responsible for enforcing the rules at all National events, in charge of the referee staff, implements referee training, handles major disputes and serves on the NPPL Rules committee. The League is excited to have Tony Mineo as the 2012 League Commissioner. Additionally Dan Fagan will be working along side Tony to assist with management of the referees during tournaments. The NPPL would also like to note that long time NPPL center court judge Edward Pei one the best flag judges in the game will be serving on the NPPL Rules committee and Field design committee. Edward will also assist with managing the referees.

Chuck Hendsch Chief Operating Officer said “Tony and Dan are going to be strong assets to the already impressive NPPL ref team and we are looking forward to their input and experience to take the League to a new level of officiating. We are also excited that other NPPL referees like Edward Pei are stepping up and contributing to the overall success of the NPPL PRO Referee program. I am really excited about this years Referee crew.”

Tony comes to the NPPL with a strong resume. He has been playing paintball since its inception in 1982 and has been a part of the highest levels of paintball from the beginning. Tony played on memorable and historical teams such as the Florida Bushmaster, Florida Terminators, and Team Rage. Moving from player to coach, Tony coached in the NXL and the NPPL with Detroit Strange. While coaching in the NXL, Tony became friends with then Commissioner Mike Ratko and upon Mike’s resignation; Tony took the opportunity to be the next Commissioner of the NXL.

Tony currently works as a police officer and has been for the past 22 years working in specialized units. His most challenging and rewarding unit was K-9. Tony has three children and enjoys playing paintball with his two sons, competing in local events.

Tony has been Commissioner for the PSP Pro field for the past six years and enjoyed supervising the Pro teams and Pro refs. He is looking forward to taking the next step in his paintball career and joining the NPPL team. “The NPPL is offering me a platform to continue managing the Pro players and teams as well as teaching how the sport should be refereed.” Tony stated. “My staff and I will be working to maintain our reputation of producing an atmosphere of competitive balance and fair play. I’m looking forward to joining the NPPL staff and new challenges.”

Dan Fagan began playing team paintball in 1996 for a field ran by Bill Cookston. In 2001 Bill started a referee group to go to national tournaments and Dan was a part of the referee crew. In 2003 Dan became assistant head referee for NXL and also ran Xball reffing for the PSP thru 2004. Dan returned to NXL in 2005 and became a part of the PSP Pro field. Dan helped run a paintball series in Mexico from 2006-2008 then became part of a referee training program in Portugal in 2009-2010.

Dan currently owns a remodeling business and has a long time girlfriend as well as three children, Dan’s oldest son refs for him from time to time. On his down time, Dan likes to play tennis competitively.
The League is thrilled to have Tony and Dan join the NPPL team. Look to see them both in action March 29th through April 1st in Huntington Beach California. They will also be attending the Southern California Pro Team Practice at Camp Pendleton Paintball Park February 11th and 12th.

The National Professional Paintball League is committed to hosting the highest quality paintball tournaments at the most affordable price. Our vision is to provide you, the player and team, a professional stage to compete on while giving you the best possible experience. We will focus on quality referees and organization while giving you an incredible vibe to have the time of your paintball life.