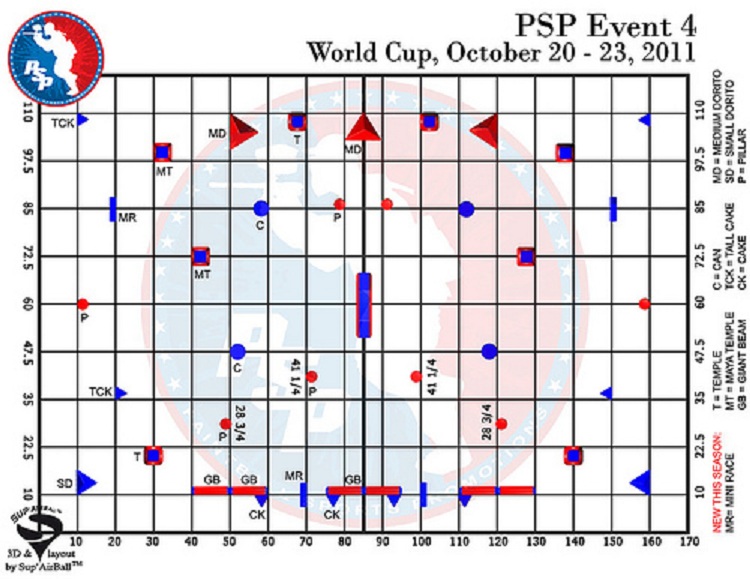 The purpose of this drill isn’t to shoot your mirror (the other player in the same bunker as you), it’s to push them in and shoot a target. They are trying to do the same.

Step 1: Using whatever layout you have up… or set one up with 2 mirrored bunkers… and 2 more mirrored but way inside… 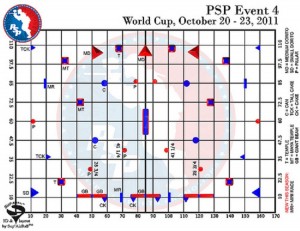 Example: We used the 2011 PSP Cup layout for this practice so I selected the following bunkers (circled in purple), but anyone can easily set up four bunkers in this configuration, even if you use pallets or trees. 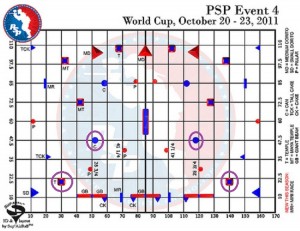 Step 2: Place some sort of target on the inside bunkers. We used 55 gallon drums but made it where there is about ¼ showing. Traffic cones with pipes in the center work or anything you can stack up to be about the height/profile of a person snapping out. Here is a picture of where I approximately placed the drums. They were way more even in real life. lol 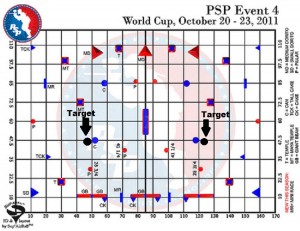 Step 3: Explain the drill to the players. The goal is not to shoot your mirror (some will get too focused on that only), the goal is to force them in and wrap and shoot the target. Both MUST ONLY shoot outside, this makes one player always shoot left handed and one right handed. All players must run the drill a certain number of times both ways (pick a number, I used 2 because we had lots of drills, but it’s your team and practice so you decide). So here’s a drawing of a win from either side. Orange being primary shots yellow being secondary or WIN shots. The weird star thing being the players and the lines are the shots. 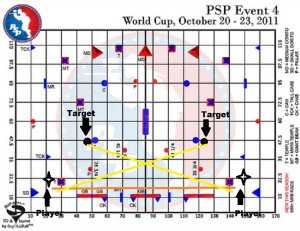 Step 4: The person who loses the drill runs a lap. Anyone who plays-on or otherwise would have gotten a penalty, runs 2 laps minimum (depending on severity). Anyone who loses focus on the target, i.e tucks in there mirror and forgets about wrapping, runs a lap.

There is another school of thought to this…players that lose the drill must go again, but I’m not sure this helps as so much embarrasses them because the folks who are bad at it just get beat and that doesn’t really help the ones that are good at it. So that is up to your team to decide.

It’s a harder drill then it looks. It’s a good drill…let me know what ya’ll think.